A Greencastle High School alumna will be returning to Greencastle this week to star in a touring musical presented by her university.

Meghan McClaine, a current junior theater education major at Huntington University, has been performing all summer in the school's touring production of "Godspell", a musical celebration of the gospel according to Matthew. McClaine and the cast and crew are taking the stage at Greencastle Christian Church at 7 p.m. Friday.

"Godspell" has been called one of the biggest Broadway and off-Broadway successes of all time.

It includes the hit song "Day By Day." Since June 7, a group of 13 Huntington students have traveled the Midwest and Mid-Atlantic regions performing "Godspell" at churches, and will end the tour Aug. 10 after having visited approximately 40 churches. 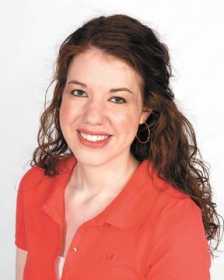 McClaine, a 2005 graduate of GHS, said "Godspell" has always been one of her favorite shows, and she was excited to hear Huntington was holding auditions for the summer tour.

"When I heard about auditions for this production at Huntington, I was really excited since it has always been a show that I've wanted to perform in because it's so much fun," McClaine said. "The show itself is audience-involved and is often full of "silliness" and joy which is just as much fun to do as it is to watch."

McClaine's other Huntington theater credits include "House of Bernarda Alba," "Little Shop of Horrors," "Broken Wings," and "The Royal Cricket of Japan," along with technical credits. Locally, she was involved in the Putnam County Playhouse with credits such as Liesl in "The Sound of Music" and Gertrude McFuzz in "Seussical the Musical."

McClaine said she was unfortunately not able to return to GHS two years ago to see its performance of "Godspell," but was able to view a recording.

"I really loved watching some of my friends having so much fun," she said.

As for being an influence to score the Greencastle date, McClaine denied it. Instead, she said the school tried to schedule a performance at each cast member's hometown church.

She said it was so they had an opportunity to go home at least once during the summer.

McClaine praises the tour so far and said its hard for her to narrow down one performance as her favorite because, due to each venue being different, they've had to tweak the performance.

"Regardless of the venue though," she said, "I'd probably narrow down my favorite performances to all of those where we had a lively audience.

"As our tour manager says sometimes to the audience before the show, 'It's perfectly acceptable to clap and laugh and sing along with us. In fact, it helps!'"

Planning to continue her theater education this coming semester as props master for the first show of the season, McClaine said she is extremely excited about returning to and performing in Greencastle.

"For one thing I'll recognize people in the audience and see some people I've wanted to see all summer!" she said. "And also I'm excited for people in Greencastle to have the opportunity to see this show again and have the chance to enjoy a really fun evening.

"That and I'll be able to sleep in my own bed after the performance."

Although she is sad the summer is almost over, McClaine said the tour has been worthwhile and can't wait to return to school to see some of her friends and get back into the swing of the theater department.