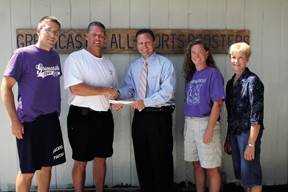 A new concession stand/ticket booth will greet fans at Harbison Stadium this fall as the Greencastle All Sports Boosters take on a building project.

As early as the week of Aug. 6, the sports boosters hope to begin with the foundation of the new structure, located at the main entrance to the football and track facility next to McAnally Center.

"We want to give back to the students who participate in athletics at the high school and middle school," said co-president Polly Shuee of the booster projects.

She and husband Bill have approached the Greencastle School Board about the new facility, and preliminary approval has been granted. The building plans are now being finalized, but the structure is set as a 20-feet by 24-feet concrete block building.

It will have two ticket gates -- for visitors and the home fans. A ticket sales area is also included in the new structure.

The building will be positioned at the fenced ticket gates, which have been previously unused, and will allow fans to be directed to the new ticket booth area before passing into the stadium. Two windows for concession sales are also planned, with one positioned for visitors and the other for Tiger Cub fans.

The main gate previously used for all admissions will still be available for handicap access and emergency vehicles.

Concession stands are the biggest money-maker for the booster club, Bill Shuee told the school board. That money goes back into athletic scholarships and equipment allowances for the athletes.

Last year, the All Sports Boosters were able to give two scholarships to graduating seniors. They hope to increase that to four scholarships this year.

Those visiting the outside concession booth might notice the structure is deteriorating. The new facility will have running water and electricity to run a variety of concession appliances. It will be used for both football and track events for the middle school and high school teams.

"Our hope is to get it erected and ready to use early in the football season," Polly Shuee said.

Another new project of the All Sports Boosters will be a sponsor program book to hand out at all home sporting events. The sponsor books will not only have advertisements, but also team photos and other information about Greencastle athletic programs at the high school and middle school. A book is planned for all three athletic seasons -- fall, winter and spring.

"These will make a nice keepsake," she said.

Last season, the booster club was able to help more than 200 athletes defray some of the cost of their sport. The organization raised and distributed more than $12,000 to help fund needs in the athletic department, and covered the costs of athletic awards earned by athletes. Those "G" letters, bars, medals and patches displayed on student athlete jackets were purchased by the booster club.

While volunteers are always needed to help with concession sales and other projects, Polly Shuee said being a sports booster member does not obligate a person to volunteer.

The "high dollar" amount to complete the new concession stand, Bill Shuee said, was figured at $30,000. But he was quick to tell the school board that is a high estimate. More than $10,000 has already been donated toward the construction, and other cash and in-kind donations are currently being sought.

Anyone wanting more information on the project or the All Sports Booster Club can contact the Shuees at 653-7456.