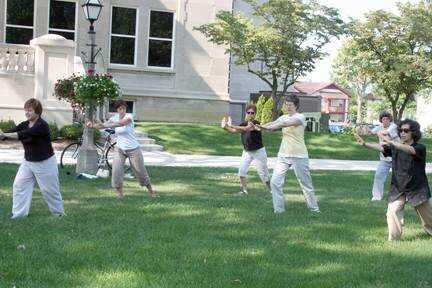 During the early evening hours on the lawn between DePauw's East College and Gobin Methodist Church a group gathers and begins moving in slow motion as they perform the ancient art of Tai chi chuan.

Led by DePauw University Chinese Professor Sherry Mou, the group has been meeting this summer every Monday, Wednesday and Friday for a half hour of one of the fastest growing fitness exercises in the country.

The group got its start three years ago with a conversation between Kelsey Kauffman and Mou. Kauffman mentioned a desire to learn the art and Mou said, "Let's do it!"

For three years off and on Mou's group would met once a week usually on a Wednesday or Thursday depending on her class schedule. As the mailing list of interested participants grew they moved from the ballroom to the outside area of East College.

"It's easier to become one with nature when you are surrounded by it," stated Mou.

"This group right now, is certainly the most dedicated I've had," Mou commented. "It's really a pleasure to teach them. They push me. They study hard."

Tai chi's popularity has grown in the last 20 years or so, as the baby boomers age and the art's reputation for improving the effects of aging becomes more well-known.

Although Tai chi is often considered a martial art the group views it as an exercise routine. Mou explained that the moves are defensive ones but they are done in slow motion as an exercise regime.

"Once you are very good at the exercises, you can speed them up and use them as defensive moves," added Mou.

"We are just doing the simplest moves," stated Newman who is the Clinic Coordinator at Putnam County Hospital. "There are 24 movements in all, we have learned the first eleven."

According to Mou the group mastered the first 11 moves by attending the class as often as possible and from studying the moves at home on DVD. They have begun working on the remaining 13 moves and expect to master them by the end of summer.

Along with Yoga, Tai chi is one of the fastest growing fitness and health maintenance activities, in terms of numbers of students enrolling in classes.

There are many different styles of tai chi, but most modern schools trace their development to the system originally taught by the Chen family to the Yang family starting in 1820. It was practiced with the aim of promoting health and longevity.

The class is open to the public. Anyone interested in attending can call Sherry Mou at 653-1309 or e-mail smou@depauw.edu.