By CAINE GARDNER and JARED JERNAGAN

After graduation took away its top two scorers and diminished its defensive presence, the North Putnam Cougar girls' soccer team is looking to rebuild, but rebuild with the sole purpose of winning 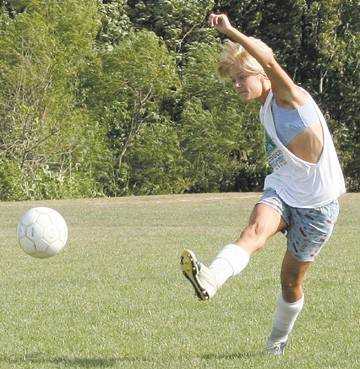 North Putnam senior Ashlee Pinney delivers a shot on goal during a recent Cougar practice. The Cougars open the season against Monrovia this Wednesday at 5 p.m.

"We lost five to graduation last year and we had a lot of freshmen come out but there's usually an influx of upperclassmen (who) come out and we didn't have that this year," head coach Scott Spencer said.

A relatively young program, the Cougar squad is being led by two seniors, Cara Horn and Ashlee Pinney.

As Spencer surveys the field for leadership, he has to look no further than his two seniors.

"The seniors will be our captains. They'll both do a great job both vocally and effort-wise on the field," Spencer commented.

When asked about the differences between his current team and last year's squad, Spencer pointed out the speed of his former team, but seemed excited about his current team's ability to be well-rounded on all areas of the playing field.

"Last year's team, we really had a fast, offensively-focused team. This year we'll have to rely a lot more on our strength and endurance," he said.

"I don't think we'll score as many goals as last year necessarily, but we're still going to be an offensive threat. I think our focus will be more on the control, tempo and pace of the game, rather than just pressing using our speed to get up the field," Spencer continued.

Strength was a word Spencer used multiple times in describing the many areas of his team, and when it came to talking about what his team's greatest attribute was, he acknowledged his team's leg strength.

"Definitely our leg strength," he said without hesitating. "This is some of the strongest girls I think I've had, so we're going to be able to put the ball in places on the field that we hadn't been able to before because of that leg strength.

"Then if we just go on our intelligence and experience, I think the upperclassmen bring a lot of experience," he continued. "Really a lot of the sophomores and freshmen have come up playing, which has really not been the case for us in the past."

With losing some of his defensive players, Spencer recognized his team might struggle as the season starts.

"Early on defensively, we're going to be weak because we graduated the bulk of our defense," Spencer commented. "We're breaking in a new goalie this year, so I've got two girls that are taking turns in there."

"From a defensive standpoint, we want to really control the ball in the middle part of the field," Spencer added.

Spencer acknowledged his team will receive some stiff competition from in county rival Greencastle and will look to grab its first win against the Tiger Cub squad as the season goes on.

North Putnam will travel to Monrovia in their opening game of the season at 5 p.m. Wednesday.

For a team that fields six seniors and 19 returning players overall, change is not generally the order of the day. However, for the Greencastle girls' soccer team, the change coming this year is in its leadership. 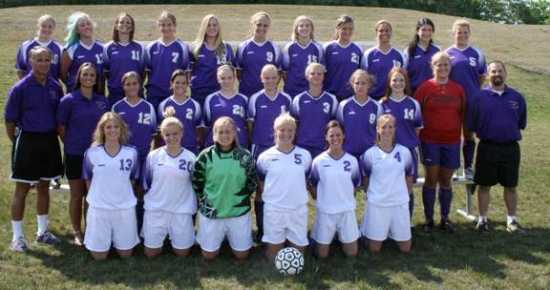 No, Coach Maurice McKee is not gone, but he has added two new assistants to the mix, and thinks their addition has benefitted and will continue to benefit his team.

"Coach Scott Weltz in a new addition to the soccer program," McKee said.

Weltz, the former GHS athletic director, stepped down from his old position after last year and returned to both the classroom and the soccer field. Weltz has 14 previous years of soccer coaching experience, and McKee likes having an additional experienced coach on the sideline.

On the other hand, McKee likes the youth of his other assistant, his daughter Joanna McKee. Joanna was a four-year player for the Tiger Cubs and a current ISU student.

"She's closer to the girls' age, and she doesn't mind stepping in and mixing it up," said McKee.

The charge of the three coaches is to take what McKee considers a talented group of players and get them to "gel as a team."

"I haves some talent, we just have to get it channeled," he said.

Through the hot first two weeks of practice, McKee's team practiced twice a day, only having to move practice inside on two occasions. He said the staff was "very pleased" with what they have seen so far.

Asked about season goals, McKee had a variety of ideas, but his main focus was the very point of any game -- having fun and winning.

"I enjoy winning, but I want them to have fun and work as a team," McKee said.

"I want a winning season," he continued. "It's a lot more fun when you're winning."

But like any other coach, McKee has his eyes on some bigger prizes.

"Conference and sectional championships are nice," he said.

The first step for the Tiger Cubs, though, is game one. They open at Tri West at 5 p.m. today. The Bruins beat the Tiger Cubs in the very first game on their new field last season, so there is a score to settle.

"We're not very happy about that," McKee said.