North Putnam football has vision of continuing its success in 2007 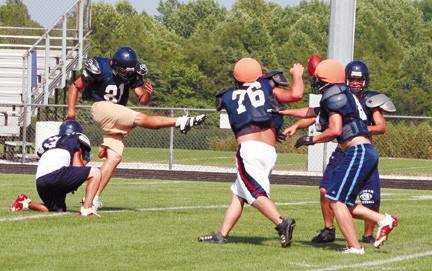 BAINBRIDGE -- Coming off a 13-1 season and a solid appearance at semistate, the fifth-ranked North Putnam Cougars football squad is looking to keep success on its side.

"We'll coach this year exactly the way we did and have the previous years, with commitment, dedication and develop relationships with your teammates," North head coach Dave Pasch said. "I think every kid is going to show up and play football hard and we just have to take it one week at a time.

"I think everybody in the state of Indiana has a vision. We definitely have high expectations and our vision is maybe a little higher than some other programs right now, but we have to approach this one week at a time and worry about getting better this week and then ultimately winning our first game against Guerin Catholic."

When posed the question of whether the Cougars will emphasize the pass or the run, Pasch noted balance is the key to a successful program.

"Our goal offensively is to be balanced. We want to present an equal pass/run threat," he said. "We have a solid group of returning skilled athletes (and) we hope that each of them will present a threat."

With the season rapidly approaching, Pasch hasn't seen anything in practice that has been a cause for concern.

"I don't think there's been any surprises. We just need to continue to do the things that we think are important. Not do anything to jeopardize the vision we have. On the practice field, we need to take care of all those little things that are going to make us competitive and just build on that one week at a time," Pasch stated.

"I think the strength of every team in high school football falls on your leadership, specifically your seniors," Pasch observed. "The seniors should be your most physically, emotionally and psychology mature."

Team was a word that wasn't in short supply as Pasch take about his Cougar football team. After a season marked by good individual performances, the Cougars are still focusing on the big picture.

"What makes the game of football special is it's not one or two players can win ball games," Pasch said. "We have to take of each other and know that the guy next to us is doing what he's been asked to do."

When the Cougars take the field each week, Pasch believes his team will exude a confidence and respect for the game that their opponents will acknowledge and admire.

"I'm proud of what we put on the field. I have tremendous respect for all of our opponents," Pasch commented. "Hopefully they think we play hard, we're fundamental and quality decision makers. I think if you do all those intangible things that create longterm success, it's all conducive to creating success in athletics. That's our goal."

When presented with the question of describing his own team, Pasch returned to a familiar word without hesitation.

"Team," Pasch said. "We've got a bunch of guys that have a vision and they're committed to that vision. Along with the leadership of our seniors, I think we're going to be a team that represents our community as well."

The Cougars will be on the road in their season opener against Guerin Catholic Friday at 7 p.m.