No excuses accepted at South Putnam 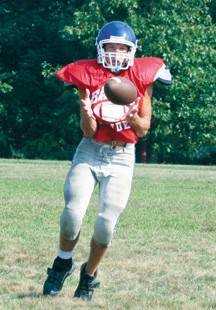 With a year in the current program under its belt, the South Putnam Eagles football team is hoping that time together will translate into victories.

Second-year head coach Troy Burgess will look to a corps of returning seniors to lead the way.

Burgess and the Eagles will have a one-two punch at both the quarterback and tailback positions.

"We've got two kids, Jon Davidson who's a senior and Hunter Edwards who's a junior. We've been splitting time fifty-fifty," coach Burgess said. "The good side of that is they're both pretty good quarterbacks. They each have different strengths.

"I feel comfortable going to Owen Valley with either one of them back there, I have that much confidence in both of them."

During his rough first season, Burgess found a bright spot that he hopes will help the offense on the ground.

"Jacob Parrish will start at tailback, we started him the last two games of the season at tailback," Burgess commented. "We discovered him in a junior varsity game midway through the season and ended up putting him in against Speedway and then he started.

Sophomore Drew Cash will be backing up Parrish and with as much as the Eagles like to run the ball, Burgess assures they both will see time.

Burgess will look to seniors Bunten, Sanders, Parker, Gray and Parrish to lead the team as captains.

"I really look to all the seniors," Burgess said. "It's a pretty cohesive group. We've been hitting it since January both in the weight room and conditioning. They've been very committed to us."

The Eagles coach acknowledged the importance of his team conditioning itself to be ready and in the best physical shape they can be in.

"We're in the same boat as a lot of people. We're going to have a lot of guys going both ways," Burgess observed. "So one injury really equals two, three or four because they're also on the punt team, punt return and so forth. I think if we can stay healthy, I think we can be really competitive this year. But we don't have a lot of depth, especially up front on the offensive and defensive lines, plus a lot of those guys going both ways. I feel we're in pretty good shape and keep everybody healthy. If we don't, it could be a tough year."

Burgess is hoping that this year's team will leave more on the field and when its opponents walk off, they know they've had a game.

"I want teams to walk off the field -- win, lose or draw -- I want teams to walk off the field and know they've been in a ball game. And obviously we want our kids to do things first class all the time," Burgess commented. "Yes we all want to win, but first and foremost, I want our kids to compete. I want them to go out and play hard and play the game the right way. And I think this group will. Usually when that happens, winning and losing takes care of itself sooner or later."

When asked about what make his current team different from last year's, Burgess focus in on the time he and the team have been able to share.

"First of all, the fact that I've been here a year. I didn't get here until late June last year, so just the fact that we've been able to spend a year together and have the type of off-season that we've had," Burgess responded. "I think we're much stronger, I think we're going to be much faster, in better shape.

"There's no more excuses. Last year it was easy to make the excuse we got a late start, we got a late jump, we didn't know each other...a lot of excuses. There are no excuses this year. we're either ready to play football or we're not."

South Putnam opens its season on the road against Owen Valley Friday at 7 p.m.