SPEEDWAY -- The lights came up on another Cloverdale Clovers football season Friday as the Clovers faced off against Speedway. The Clovers fell to the Sparkplugs, 30-0, despite holding Speedway to 10 first half points. 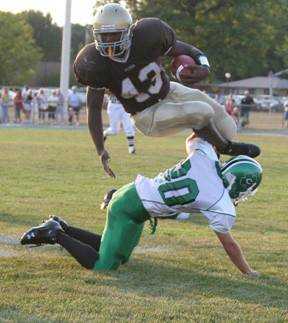 Speedway started strong with Trai Jones carrying the ball four times for 33 yards in its opening drive, but the Clovers stalled the Sparkplugs as Zach McCallie recovered a Kyle Linville fumbled.

The Clovers mounted an equally impressive drive, with Dillin Gray carrying the load, rushing for 39 yards on six carries. But the Clover drive came to an abrupt end as the Clovers fumbled the ball on the 18 yard line.

The first score of the game came when Speedway's Jaron Avance scampered six yards for the touchdown with :50.1 remaining in the quarter.

The Clovers first drive of the second quarter ended after three plays, but Cloverdale recovered a fumble on a Speedway muffed fair catch at the 41 yard line.

Unfortunately the Clovers were unable to capitalize on the good field position.

Speedway added a 20-yard field goal with 3:02 remaining and sent the Clovers into the locker room with a 10-point deficit.

Cloverdale received the kickoff to begin the second half and proceeded to go three and out with Gray rushing three times for four yards.

The Clovers defense stepped up and forced the Sparkplugs to go three and out.

After a stalled Clover drive, the Sparkplugs were marching down the when tempers began to flare.

With 2:27 on the clock, a ruckus broke out on the field that brought players from both sidelines onto the field. After the dust settle, the Clovers had two players sent to the bench for the rest of the game. The next play, Speedway found its way into the end zone once again, to make the score 16-0 after a failed point after.

The Clovers were never the same after the on field incident.

Speedway closed out the third quarter with a 35-yard touchdown pass from Ethan Bartel to Eric Law, to bring the score to 23-0 in favor of Speedway.

The fourth started well for the Clovers, as McCallie ran for eight yards and Lee Secrest rushed for three yards to pick up a Cloverdale first down. But again the Clovers were unable to keep their momentum and gave the ball back to Speedway.

The next drive saw the Sparkplugs enter the end zone for the final time on the night as Avance rushed up the middle and scored from 28-yards out.

One bright for the Clovers came in the fourth quarter when freshman Jordan Hayden came into the game a fired a bullet pass to Matt Hall for a 40-yard gain.

Although the Clovers showed moments of control and an ability to move the ball against Speedway, their coach sees room for improvement.

"Overall it is very disappointing," first-year coach Kyle Winkler said after the ball game. "I told the kids coming into the season there's two things we can control and that's attitude and effort. We got lackluster effort and very poor attitude going into the second half and especially when they were driving down the field. "We got the two personal fouls on our players. We obviously talk to them over and over coming into tonight game about their attitude and after the whistle activities and so forth. We drove the ball, we ran three basic plays, we drove the ball and knew what we were doing, but we killed ourselves basically with fumbling the ball, penalties."