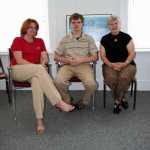 Autistic teen Alex Lewis will talk to others about his experiences, with support from his mother Pam Lage (left) and autism coordinator Lucy Weiland, during a panel discussion set for Tuesday.

Autism is a syndrome as different as every person affected by it.

Some people are able to function in regular society -- having jobs, attending school, driving. But others can be severly affected to the point of having no speech and limited physical control.

That is why a wide range of panelists are planned for Tuesday's public forum on autism, beginning at 6:30 p.m. at the Putnam County Museum.

A similar forum in April overwhelmed planners when more than 100 people attended to hear and talk about autism.

This time, the planners are prepared for a large audience, and hope for an informative discussion infused with the experiences of autistic people and their families.

Alex Lewis, a student at South Putnam High School, and his mother Pam Lage, are among the panel participants.

Alex is affected by Asberger's Syndrome, which was first identified in 1991, the year Alex was born.

Discussing his experiences last week, his mother said she first found out Alex was autistic in preschool.

"I learned a lot as he grew, such as he has hyptersensitivity to some things, like his teeth," Lewis said.

She also noted that Alex could mimic things he saw on television commercials, and developed a very good vocabulary at an early age.

He can also make intricate models with Legos, the children's building blocks, but he could not tie his shoes, a fact which frustrated Alex and puzzled his family.

"Each person with autism is so unique," said Lucy Weiland, autism coordinator for the Old National Trail Special Services Cooperative, which oversees special education for Putnam County schools. "It's like another puzzle piece."

Alex has attended school in the South Putnam district and has received a lot of support from Old National Trail and the school system, his mother said.

Alex said his interests include history and video games, and he especially enjoys video games that involve plots from the past.

"I like video games," he said. "It's a good escape to get away from my troubles."

Alex received a laptop computer for his birthday, and he's shown a talent for computers.

His mother says Alex has a great imagination, but he can have trouble expressing those ideas when he tries to put them onto paper for a class assignment.

"Sometimes I even amaze myself," Alex quipped.

Most people with Asberger's are tested at normal or above normal intelligence, Wieland said. They have good vocabularies and usually become experts in some area. That is due to the attention to detail they can focus on an interest. But they also have trouble being easily distracted.

Wieland said many successful people in history may have had some form of Asberger's -- people such as computer tycoon Bill Gates and scientist Albert Einstein.

The number of children being diagnosed with autism has increased in recent years, Wieland noted, and that may be due to both better diagnosis as well as more incidence of the syndrome.

But the diagnosis of autism is only the first step in helping people learn how to live a more fulfilling life with autism, she said.

Tuesday's program is designed to inform and encourage those faced with diagnosis in their families or themselves.

The program is free and open to the public.