By CAREY FOX, For the BannerGraphic

PUTNAMVILLE -- Jeff Bland finally cracked the victory column at Lincoln Park Speedway Saturday night, pulling away from the field over the final laps to earn the coveted King of Non-Wing title. 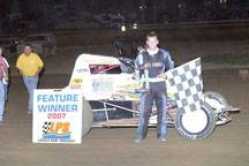 Bland had been close several times at the Putnamville oval, but some bad luck and stiff competition had always held him at bay. But this time around, not even three-time winner Bobby Stines or Aaron Mosely could keep him from taking home the winner's share.

Danny Williams Jr. led the early circuits before being overtaken by Mosely and Kenny Carmichael Sr. Bland was trailed by Stines through the field and moving up quickly. A bobble by the front runners in traffic gave Bland the opening he needed, shooting from third to first past Kenny Niflis.

Once he took the lead, there was little that could stop the ServPro, Auto Credit and Service Drywall machine. Bland held off a late restart and pulled away from the competition over the final handful of laps.

Mosley stayed in second over the final laps, holding off Stines who blasted up from eighth starting position on a track that gave up few passes. Williams Jr. took fourth ahead of Carmichael, Shawn Krockenberger, Andrew Prather, Niflis, A.J. Martin and Arin McIntosh in 10th place.

Season points leader Billy Puterbaugh had some bad luck and was forced from the feature early finishing in 20th place overall.

Geoff Dodge led wire-to-wire in the second sprint feature of the evening, besting Dustin Beliles, Ryan Brewer and Stephanie Tuttle in the top-five.

In the UMP Modified feature, Travis Shoulders started from the pole and maintained that spot over the entire feature for his second feature win of the year.

Brad Robinson gave chase over the course of the A-Main but wasn't able to gain enough momentum for a pass on a slick track. Shoulders kept the top spot without making a mistake in taking the Patterson Driveline, Cardinal Contracting, Euber & Sons modified to victory lane.

Harry Shepherd moved up to third with Chris Brewer in fourth and Matt Bex in fifth place. Bradley Sterrett took sixth ahead of Paul Bumgardner who was forced to run the B-Main, which he won. Carlos Bumgardner followed in eighth ahead of Harold Grayless and Dan Lewellen.

With a new motor bolted into his Carmichael's Exhaust, L&R Roofing super stock, Kenny Carmichael Jr. topped the field wire-to-wire for his third win of the season.

Doug McCullough tried all the angles throughout the feature but couldn't make a move stick to get past Carmichael. Joe Whisler took third place ahead of Kris Starks and Mike Wright Jr. in fifth. Paul Wright raced to a sixth place ahead of Carlos Bumgardner, Larry Rowley Jr., Ritchie Hawkins and Mark Dickerson.

David Daniels picked up his first bomber win of his career on Saturday.

The Dugger, Ind. native, coal miner by day, race car driver by night, scorched a solid field when he got past points leader, Lloyd Walls and pulled away from the four-time 2007 winner.

Daniels took the victory ahead of Walls, Ritchie Hawkins and Ben Williams, who are all 2007 winners.

Next week will feature the third-annual Patriot 100 for UMP Modifieds as well as bombers and super stocks.