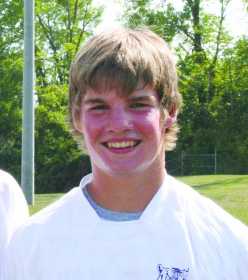 In varsity action, the Tiger Cubs put together an impressive first half to led 4-0.

Senior Pat Eiteljorge took a pass from teammate Eric Davis and scored a goal with just under 10 minutes played in the game.

Next, junior Greg Lilly delivered an assist to freshman Spencer Moore and Greencastle's lead was 2-0. With only 1:08 remaining to play in the period, Lilly slipped a shot past Mounties goal keeper Nicholas Truncone and the score was 3-0. Pat Martin provided the assist. Just a few seconds later, Eric Davis was fouled in the penalty area. Pat Martin stepped up and finished on the penalty kick with 22 secconds remaining in the half to increase the lead to 4-0 at the break.

Southmont battled back in the second half, with Tyler Witherspoon scoring on a penalty kick with 30:19 to play. Witherspoon would score again less than 3 minutes later when he headed in a corner kick to cut the lead to 4-2. Both teams had several chances to score during the remainder of the match, but neither team would find the net and the game ended.

"I give Southmont credit for not quitting in the second half. They battled back and made us step it up defensively," head coach Dave Lilly said.

opportunities we had early in the second period, before they scored. We still need to do a better job of controlling the ball when we have a lead," Lilly commented.

The JV team won 3-1, with Jess Elkins scoring a pair of goals, assisted by Damir Tarabar and Josh Dunn. Lossan Jones netted an unassisted goal and Greencastle led 3-0 at the half. The Mounties were able to score late in the second period and the game ended 3-1. The Tiger Cubs JV record now stands at 3-1.

Greencastle (4-2) will take on the host North Putnam Cougars at 5 p.m. today.

Next game -- Greencastle (4-2) will take on the host North Putnam Cougars at 5 p.m. today.