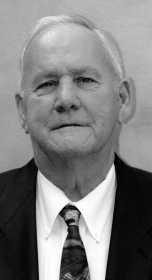 Born in Gosport, he was the son of Dr. Charles and Mary Stouder.

A member of First Baptist Church of Greencastle, the Lions Club, and the Gosport Chapter of the Masonic Lodge, he was a salesman at Correlated Products of Indianapolis for 35 years.

He attended Indiana University on a basketball scholarship.

He married Mary Janet Asher on the TV show, "Bride and Groom" on April 8, 1952, in New York City. They recently celebrated 55 years of marriage.

He was preceded in death by his wife Janet and his parents.

Services will be at 3 p.m. Sunday at the Whitaker Funeral Home, Gosport, with Rev. Paul Bowen officiating. Burial will follow in Gosport Cemetery.

Memorial contributions can be made to the Gosport Masonic Lodge 92, 4061 Cherokee Pass, Gosport, 47433.