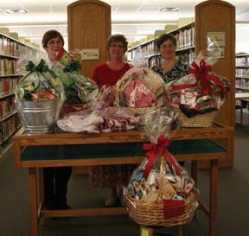 Five of the 10 baskets being offered at auction for the Friends of the Library Gala on Oct. 5 are shown off by member Kay Weaver, Treasurer Suzy McCarley and former President Sue Parsons. The star spangled banner afghan (center) is handmade by Alice Via. It was donated in honor of the circulation desk. The baskets and afghan can be seen beginning Sept. 5 at the library. Final bids will close on Oct. 5 during the gala.

Book, basket and art lovers are invited to a Friends of the Library sponsored celebration of the Putnam County Public Library which kicks off Wednesday.

A silent auction of books, gift baskets and art opens the celebration. Ten gift baskets filled with goodies go on display on starting Wednesday in the library's adult area along with several works of art.

The basket themes include a Car Wash, Gardening, Pamper Your Dog, Book Lovers, Knitters, Coffee, Kiddies, Aroma Therapy and Soaps, Teatime and For the Birds.

Also to be auctioned is a handmade afghan called Star-Spangled Banner made by Alice Via. It was originally intended to be included in the Book Lovers basket but was so delightful, members of the group decided to auction it on it's own.

Silent bids can be placed all month on the items. Final bids will take place at the Friends' Gala on Friday, Oct. 5 from 6 -7:30 p.m. in the library's Kiwanis Room.

Two Looney Tunes cartoons drawn by cartoonist Mike DeCarlo will be in the auction. DeCarlo works for Cartoon Network, the Simpsons, Warner Brothers and Disney. He is also the brother of DePauw professor Vic DeCarlo, and has conducted a youth workshop on cartooning at PCPL.

A sketch of the Oakalla Covered Bridge by internationally known artist and former DePauw faculty member Ray French will also be in the silent auction.

All proceeds from the event benefit the library.

A second part of the celebration pays tribute to the cadre of Friends of the Library who made the 1996 expansion possible. To honor them FOL is conducting a "Name that Library Hero" contest.

From Wednesday to Oct. 5, photographs of the top 10 library heroes responsible for the expansion will be on display in the local History Room on the hearth under the painting of Rose South.

Whoever identifies all of the photos which were taken between 1987 and 1996 during the drive for expansion will win a prize.

"Without these heroes and their hard work, public library staff and patrons today would be squeezed into a tiny space with no access to computers, no room for local history and with outdated collections.