CLAYTON -- North Putnam's boys' soccer team used some tough defense to hold off and attacking Cascade offense for most of the first half Monday evening. However, the Cadet offense ultimately won out, putting up three goals against a Cougar offense that struggled to get into gear all night.

The Cadets maintained control of the ball for the bulk of the first half, keeping the ball in North Putnam territory. Cascade struggled, though, to turn its control into goals, as the Cougar defense, particularly goalie T.J. Wilhite, denied all their scoring opportunities. 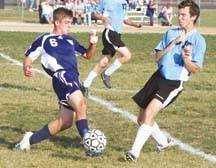 North Putnam's Cody Summerlot drive the ball past Cascade's Justin James during Monday night's contest. The Cadets handed the Cougars a 3-0 loss. The Cougars will be back in action against Monrovia at 5 p.m. Wednesday.

"I thought our defense played really well," said Cougar coach Dave Moeller. "I think the last few games we've been playing a lot better, not stabbing as much, just containing and making sure we're marking off. We've been doing a good job of that these last few games."

No bigger defensive play came in the game than when Wilhite denied Cascade's Joel Fisher from close range, then got right back up to make another save on the rebound.

The constant attacking, though, took its toll. Having been denied by Wilhite several times, Fisher finally broke through for a goal with 1:09 to play in the half.

North Putnam trailed 1-0 at the break.

One big difference in the first had been the wind. The Cougars had been playing against the wind, which meant any high kicks were fighting the wind. Moeller thought the conditions played a big part in his team challenging the Cadets more in the second half.

"I think in the second half the wind played a big factor," Moeller said. "We were able to play those balls where their defenders weren't winning out of the air, and we were able to put some pressure on them, maybe make them make a mistake."

Unfortunately for North, they were unable to force the Cadets into any major mistakes.

What they did give them was a more competitive match in the second, even if the final score did not reflect this.

Much of the beginning of the second half was played in the middle of the field, with neither team able to maintain ball control for very long.

The wind difference could be seen in Wilhite's kicks, which were traveling nearly twice as far as they had in the first half, and well into Cascade territory. 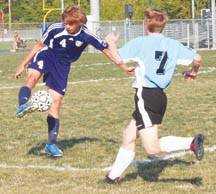 North Putnam's Nathan Jones gains control of the ball from Cascade's Craig Tidler in the second half of Monday's 3-0 loss to the Cadets.

With 16:22 remaining, Dylan Alltop sent a shot through the NP defense that found the net. The Cadets led 2-0.

North Putnam mounted several scoring attempts in the coming minutes, with sophomore Shin Ryu being denied with 11:45 remaining, as well as two consecutive corner kicks at around the 10 minute mark.

"We were playing a lot better, just stringing passes together in the second half," Moeller said.

But Cascade maintained the momentum. Fisher got the night's final score with an unassisted goal with 9:03 remaining.

This brought the score to its final 3-0 mark.

The Cougars host Monrovia in another WCC match at 5 p.m. Wednesday.