TERRE HAUTE -- For two hours Thursday night, the fall chill dissipated as the Greencastle girls' soccer team went to battle with the Sullivan Golden Arrows, with a trip to the sectional finals on the line. 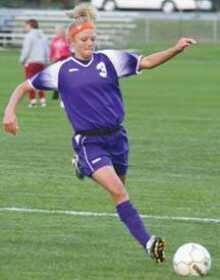 Whitney Brotherton passes the ball in the second half of Thursday's 3-0 win over Sullivan. The Tiger Cubs will face Northview in Saturday's final.

The Tiger Cubs came out victorious, defeating the Golden Arrow 3-0.

"We knew it was going to be a tough game. We watched them play the other night against Terre Haute North, so we knew what they were capable of," GHS head coach Maurice McKee said. "It was a very physical game."

The Tiger Cubs pounced on Sullivan early as Hannah Spencer scored a goal in the opening minutes of the game, giving Greencastle a quick lead.

The Tiger Cubs and Golden Arrows went at each other throughout the first half, with Greencastle showing a more physical style of play than normal.

Greencastle held to a 1-0 lead as the half ended.

In the second half, Greencastle continued to press the Golden Arrows and extended its lead on timely goals. 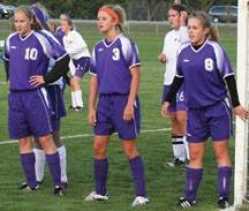 After Spencer had a shot deflected out of goal, Grace Fisher positioned herself in the middle and drilled a shot past the Sullivan keeper to give Greencastle a 2-0 lead.

Spencer was sent to the bench after picking up a yellow card with 27:28 in the game when she made contact with the Golden Arrows' keeper. Six minutes later, she met up with the keeper again but with a different outcome.

After reentering the game, Spencer gained position in front of the goal and powered the ball into the net to give Greencastle its third and final goal of the night.

The Tiger Cubs were playing without defender Samantha Sillery, who dislocated her collarbone in Greencastle's opening game and received a lift from its bench, with Katie Collins and Erica Soster getting the starting nod.

"One of the keys was we had some no-starters come on tonight and played a great game," Tiger Cubs assistant coach Scott Weltz said. "Kate played tremendous. Alex Jackson was her target and that's whom she had to mark all night long. And she (Jackson) had no goals."

Greencastle now faces off against a Northview squad that dealt the Tiger Cubs a loss early in the season, but now the sectional title is up for grabs.

"The girls are going to be very ready," McKee, commented. "We'll come back and hope it's a pretty day on Saturday evening and play a hard game and see what we come up with."

Greencastle will face Northview in the Terre Haute Sectional at 6 p.m. Saturday.

Next match -- Greencastle will face Northview in the Terre Haute Sectional at 6 p.m. Saturday.