By CAREY FOX, For the BannerGraphic 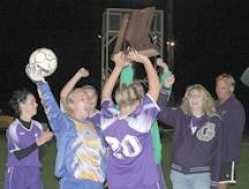 TERRE HAUTE -- Rarely is any title worth having easy to attain. That was the case for the Greencastle Tiger Cubs on Saturday night.

Greencastle (14-2-3) completed a run through the toughest bracket at the Terre Haute South soccer sectional with a 3-1 victory over the Northview Knights to claim the championship and advance to the Mooresville Regional on Wednesday night.

The Tiger Cubs not only had to beat three tough teams on the way to the championship, but avenged an earlier season, 3-2 loss to the Knights.

"I was very pleased tonight," commented coach Maurice McKee. "We weren't at full strength the first time we played (Northview), but tonight we were. It was nice to see."

Hannah Spencer had paced the offense in the team's first two postseason games, with a hat trick in the sectional opener and two more tallies against Sullivan in the semifinals. On Saturday, the Knights knew exactly what they had to do to pick up the win, but were unable to do so.

After a scoreless first half, Spencer got a quick shot off a break less than two minutes into the period only to have it saved by the Knights' Christina Arvin.

But two minutes later, senior Crystal VanArsdale broke along the sideline on a long run before crossing the ball to the box where Spencer was on the money for the game's first score.

"We told the girls at halftime that our normal running game wasn't working so we went to the passing game," said McKee.

The decision resulted in a rush of opportunities for the Tiger Cubs who amped up the pressure on the Knights.

However, Greencastle had to weather Northview's first goal which game on a shot from Charlie Greichgauer from the top of the box. Her drive found the net just under the cross bar less than three minutes after Spencer's tally and knotted the score.

From there, the game settled into a physical slugfest with neither team willing to give any ground to the opposition. Not for the faint of heart, the play on the field contained plenty of collisions as each team scrapped for an advantage.

Northview's Carlee Bell broke free on a long run eight minutes into the second half for a one-on-one chance with Tiger Cubs' keeper, Micki Ehrhardt. Bell's shot was to the corner, but Ehrhardt was up to the challenge, tipping the ball wide of the goal. The Knights had a second chance immediately afterwards on a ball that scooted away from Ehrhardt after a save.

Becky Grivas was there to boot the ball away from an open goal mouth to maintain the tie game.

The Tiger Cubs defense was on top of their game all night, frustrating the Knights best chances.

"(Becky) Grivas and (Katie Collins) did a super job," said McKee. "Hannah Deer also played a good game for us. She's been great all year and played smart.

Melissa Ball stepped up and has been phenomenal all year long, she really reads the ball well."

While the defense was busy keeping the game even, the offense began to counter the Knights' attacks.

At the 57 minute mark, Spencer gathered in a loose ball at the top of the Knights' box and after a couple of strides, fired home the eventual game-winning goal.

"Hannah is an excellent player," assessed Northview coach Tony Alstott. "Coming in we counted on her getting two goals. We had lots of chances. Greencastle's goal keeper did a great job of keeping (the ball) out of the net."

Northview didn't let up with their pressure, getting a couple of late opportunities on centering passes from Tylee Graverson and Carlee Bell. However, Greencastle held fast to the lead, eventually adding a final score from Spencer with just five seconds remaining.

"Obviously we're going to rest up," said McKee when asked about preparing for the midweek regional game.

"It's going to be a tough game, but we're going to give them our best shot."

The victory continues the Tiger Cubs' three-year cycle of sectional titles, all on 3-1 scores. Greencastle defeated Terre Haute North for the title in 2001 and 2004 and now own a championship in 2007 and will take on perennial sectional champion Center Grove. The Knights finish the best season in school history at 12-6 overall.