LIZTON -- Through two games at Tuesday's opening round sectional match, the Cloverdale volleyball team looked lifeless. Speedway was scoring at will and the Clovers couldn't get out of their own way. 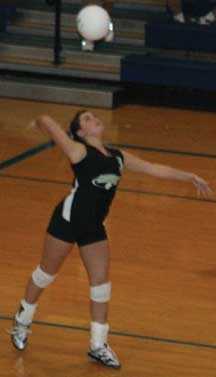 It looked like a rough end to the season.

Fortunately for the Clovers, they weren't ready to throw in the towel.

"This is the biggest comeback in the history of Cloverdale volleyball, or at least as long as I have been here," said Clover coach Kathy Moore. "I really thought we were sunk with the way we were stinking in our first and second games."

It would appear the Sparkplugs thought so as well. Everything had favored Speedway through two games. They had won each by at least 15 points. Add to that the Sparkplugs had defeated the Clovers in three games just last week, and there was little reason to believe there would be a comeback on Tuesday.

"When you smoke somebody a game or two, you let down. And that's the perfect time to come back and show them otherwise, and I told the girls that," Moore said.

At the beginning of game three, it looked like the two teams had changed uniforms.

"Speedway started making some mistakes and we capitalized on those," Moore said.

The coach had changed her lineup, and it showed quickly. Kaileigh Sparks opened the game with two aces. Kristin McCammon came up to serve next and did even better. Of McCammon's 14 service points, 13 came consecutively in a run that put the Clovers up 16-1. From there, they cruised to 25-13 win that was topped off by a McCammon kill.

It looked like the Clovers had bought in to their coach's words and turned the tables.

"I said, 'You're trying to hard and you have to go with the flow of the game and you take the hits where they happen and you use every weapon you have available,'" Moore said. "And I said, 'You have got to dig, scrap, whatever it takes to outplay these kids over here because that's exactly what they're doing to us.'"

Game four wasn't so easy, but the tide had obviously shifted. Speedway got out to a 7-4 lead, but the Clovers slowly took over again.

Ashley Koosman came to serve with the score 21-19. Three points later, the Clovers had tied the match with a 25-19 win.

While everyone in the gym was tense, it was obvious Speedway, the sectional favorite coming in, was the more nervous of the two teams, something that had changed from the beginning of the match.

"We knew that Speedway was favored coming in, but I also told the girls that we're still the reigning champions. It's up to everybody else to beat us," Moore said. "I think me saying that scared the Dickens out of them, so I'm going to have to be a little more careful what I say to them come Saturday."

There was little doubt in the third match. The teams traded points early, but Cloverdale took over again. The match ended when a Speedway block attempt landed out of bounds.

The Clovers (16-14) advance to face Monrovia at 11 a.m. Saturday. The Bulldogs also won a five-game match over Tri-West.

The Clovers have to feel good playing on the Tri-West court. It was the site of last year's sectional championship.

"We won here. I told them, 'This is our court. We're going to win here again.' For some reason they believed it the third game," Moore said.

"We're going to come back and we're going to play Saturday morning and that's all that matters. That's the second step in our goal," she concluded