MOORESVILLE -- The Greencastle girls' soccer team's season came to an end Wednesday night as Center Grove dealt the Tiger Cubs a 9-0 loss at the Mooresville Regional.

The game got underway an hour late due to ill weather but the Trojans didn't skip a beat. 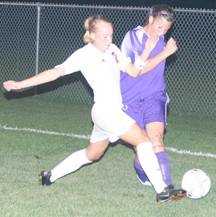 Greencastle's Hannah Deer battles with Center Grove's Ali McCarty for position in the second half of Wednesday's regional contest.

"We knew it would be a tough game coming in," GHS coach Maurice McKee said. "Center Grove is a very finished team. They can place the ball very well with their feet. They know how to be aggressive and they have a large group they can pull from.

"We just gave it our best shot," he added.

The Trojans scored their first goal at the 28:55 mark, when Megan Hock blasted a shot past GHS keeper Micki Ehrhardt. Hock scored again two minutes later and Brooke Piercefield added Center Grove's final goal of the half with 3:58 remaining.

If the Tiger Cubs thought the Trojans would cool off in the second half, Lacey Hersman put those thoughts to rest quickly.

Jackie Smith booted a curving corner kick that would make David Beckham envious, placing the ball in front of the net for Hersman to put it away less than a minute into the half.

Center Grove continued to attack the Tiger Cubs and Greencastle would not back down. The Tiger Cubs hit the pitch with more aggression, speed and tenacity in the second half but the seasoned Trojans simply pulled away.

Despite allowing nine goals, Ehrhardt provided some great saves and kept the game closer than what it could have been. Another bright spot for the Tiger Cubs was the play of defender Becky Grivas. Grivas covered the entire field throughout the night and keep attacking the Trojans' offense.

"Becky Grivas has been super all year long," McKee commented. "She has been outstanding back there. We couldn't ask for anyone to do it any better. She was all over, she was cleaning up back there, which is exactly what she has to do and she's done an exceptional job all year long.

"Coach Weltz has come on line with me and he's got a good background that he's brought to the team and it's helping. That's why we've gotten as far as we have gotten this year, because we've had a lot of good ideas brought to us that we haven't had and the girls have followed them along, improved and progressed very well throughout the season," McKee said.

Greencastle ends the season with a record of 14-3-3.

Greencastle ends the season with a record of 14-3-3.