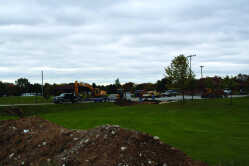 Work has begun on the improvements scheduled for Big Walnut Sports Park and the section that now belongs to the Greencastle Parks and Recreation Department.

Heavy equipment was brought in last week and crews began moving material needed to pave the road and parking lots and install a new walking path at what is slated to become Big Walnut Community Park.

Recently, the park board approved spending $163,719 for the project, a majority of that money to be paid for through a Department of Natural Resources grant totaling just less than $130,000.

In addition to the parking lots and driveway, the parks department plans to install a nine-hole disc golf course, a children’s playground and wildflower garden.

The park board has until December of 2009 to complete all the improvements at the Sports Park, as dictated by the grant. It will be reimbursed up to the $130,000 that was provided in the grant.

Parks and Recreation Director Rod Weinschenk has said he hopes to add picnic tables to the area as well and pointed out that the new asphalt will also make the restrooms and concession accessible to people in wheelchairs.