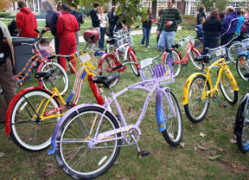 Colorful bicycles of every shape and size dot the lawn of East College Thursday afternoon.

Riding with a helmet on, Tzouanakis School third-grader Duke Duff was careful as he navigated the streets and sidewalks around DePauw University Thursday afternoon.

He, along with several TZ classmates, participated in "Re-Cycling Art," a public art project that saw 100 decorated bicycles introduced to campus for public use.

The entire project was the kickoff for ArtsFest 2007: Art and The Environment, DPU's annual celebration of the creative and performing arts.

"Would you like fries with that?" was the theme for the bike decorated by the Students Services Office.

"Our theme is ‘We serve all students,' said BethAnn Newton of the office's motto, "so ‘Would you like fries with that?' was fitting, we thought."

Indeed, the giant golden fries in the basket of the bike ridden by Mike Schmeckebier conveyed the idea of service.

Some of the bikes kept to the theme of the environment, such as the "It Ain't Easy Being Green" bike. 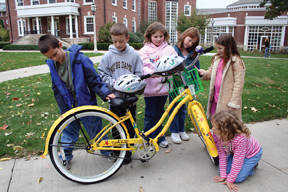 Nathan Gobert, Duke Duff, Gabby Selvia, Kelly Hansen, Megan Matthews and Emma Newton took a close-up look at the "recycled" bike created by the class of Karen Hirt at Tzouanakis Intermediate School. The students used a theme of bicycle safety, and included a helmet for future riders to use. The TZ class of Jeanette Edwards also "recycled" a bicycle for the DePauw University project.

Following the bike parade around campus, a cookout on the lawn at East College allowed onlookers to check out the bikes. Many were painted in multi-hues. One went for the bedazzled look with shiny silver studs and chrome hubcabs. Another had suede fringe and cowboy six-shooters in holsters. The chemistry crowd was in their element as they decorated their two-wheeler with the periodic table, while a purple bike gave the social message "There's No Excuse for Domestic Violence."

TZ teacher Karen Hirt praised the third-graders, including Nathan Gobert, Gabby Selvia, Kelly Hansen, Megan Matthews and Emma Newton, for coming up with their bike ideas. Some of the youngsters belong in teacher Jeannette Edwards' class, which also recycled a bike. The safety bike has inscriptions with, what else, bike safety advice, including warnings to obey all traffic rules and to wear helmets. 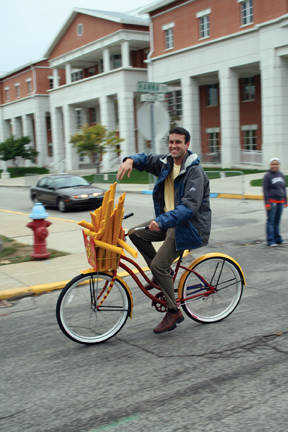 Mike Schmeckebier from the Students Services Office at DePauw University rides along on Hanna Street Cyclists ride 100 creatively "recycled" bikes through the DePauw University Thursday afternoon in a parade to kick off for ArtsFest 2007: Art & the Environment. The french fries in the bike basket asks the question, "Would you like fries with that?" in response to the office's theme of "We serve all students."

DePauw Junior Lukas Schooler said the bike project will continue to be an excellent way for the campus community to interact with Greencastle at-large. All of the bicycles will be available for public use. They will be parked at bike racks around campus and can be used by anyone wanting to cycle around campus or even to downtown Greencastle.

Each bike -- some are men's models and some are women's -- carries a card outlining the bike sharing project, and asking that any needed repairs be reported so the bike can be picked up, fixed, and returned to service.

How long the bikes remain on campus is up to the community.

"They're here indefinitely," Schooler said, "as long as the campus respects them."

ArtsFest 2007: Art & the Environment continues through Sunday, Nov. 4 with art exhibitions, theatre performances, concerts, lectures, film screenings, creative writing readings and more. Departments, programs, and organizations collaborating in the 11-day festival include the Peeler Art Center Galleries, Film Studies, the DePauw School of Music, the DePauw English Department, DePauw Theatre, the DePauw Performing Arts Series, the DePauw Greek community, and numerous student organizations including the Student Arts Council, the Bicycle Club and the Environmental Club. All events are free and open to the public with the exception of the DePauw Theatre production. The closing event will be Art Attack, a day of free art performances, workshops and hands-on art activities for children at the Green Center for the Performing Arts from 12:30-4 p.m. Sunday, Nov.

A complete schedule of all activities can be found at www.depauw.edu/arts/artsfest.

For additional information, contact Gigi Fenlon at gfenlon@depauw.edu or 765-658-4485.