CLOVERDALE -- Having put their second consecutive Tri-West Sectional title behind them, the Cloverdale volleyball team is on to this Saturday's Forest Park Regional.

The Clovers entered last week's sectional just one game over .500 for the year at 15-14, but put together a three-match run to take the title again and improve to 18-14 on the year. 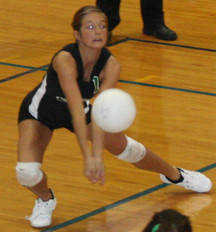 Kayla Shepherd digs out a ball in last Saturday's match with Monrovia.

"After we beat Speedway on Tuesday, we felt as though we could win this tournament again," said CHS coach Kathy Moore after the Clovers' finals win over Covenant Christian.

The Clovers have gone through their share of ups and downs during the season. Although they won last month's Putnam County Tournament, they were also just 2-4 in the West Central Conference for the year.

The final conference loss came at the hands of Speedway, in a three-game match that was not even close at 25-17, 25-10, 25-6. With the Sparkplugs as the their first-round match-up, it looked like it could be an early exit for the Clovers.

With the favorites out, the Clovers went on to defeat Monrovia and Covenant Christian last Saturday and move on to this week's regional.

Although the Miners' success and earlier victory could be a bit daunting, Moore said she looked forward to the opportunity and experience that awaits her team.

"We are very excited to continue practicing another week and we look forward to playing Linton in the regional," she said.

The Clovers and Miners will meet at noon (11 a.m. CDT) Saturday at Forest Park High School in Ferdinand.