DePauw scores early and often on way to 35-6 win

Sometimes when things are going, they're really going right.

That was the case for the DePauw passing game Saturday, as quarterback Spud Dick went14-for-17 for 322 yards and a school record-tying five touchdowns. Chris Gasbarra caught three of the scores to tie the school record for receiving touchdowns in a game. 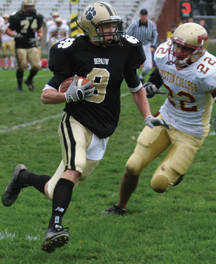 It all added up to a 35-6 victory over the visiting Austin College Kangaroos. The Tigers move their record to 6-2 (4-2 SCAC).

The Tigers got off to the kind of start they wanted, taking the opening drive 69 yards in nine plays. Jeff Bonner took the ball the final 19 yards on a pass from Dick.

The Brendan Smith kick made it 7-0 Tigers.

"We told the guys the number one thing we wanted to do today was come out with a fast start like we did the first game of the season," DePauw coach Matt Walker said. "That's all we preached all week long. We practiced better, we had more urgency in practice. We just kept preaching it, ‘Fast start, fast start, fast start.' They got sick of us saying it, but you get what you emphasize in practice."

The Tigers threatened seriously twice more in the quarter, getting inside the Kangaroos one-yard line twice, but came away empty-handed each time. The first came on a Jeremiah Marks fumble, and the second when Austin stuffed the senior on fourth-and-goal.

Austin was unable to capitalize, though, a theme that would continue all day. The Tigers held the Kangaroos to 1-for-12 on third downs. Walker was particularly pleased with this aspect of the defense.

"That's been our downfall all year on defense. Third down has been terrible for us, especially 10 yards or more has been really bad," Walker said. "We finally got that thing turned around and got off the field and got the ball in the hands of our offense."

The offense got back on track in the second quarter. Dick put the Tigers up 14-0 when he found Gasbarra for a 10-yard touchdown with 13:11 remaining in the half.

Austin looked like they would make it a game when they went 49 yards on four plays later in the second. Ryan Crowley capped the drive with a three-yard rush for the touchdown. A missed extra point kept it at 14-6.

DePauw came right back, though, with a two-play touchdown drive.

On the second play, Dick found Gasbarra on a short pattern, but the junior took it the rest of the way for a 57-yard score.

"Another thing we preached in practice this week was throwing quick balls and (having) receivers making plays after the catch," Walker said. "We were able to do that all day. We had a bunch of balls caught at five or six yards that we broke for big gains."

DePauw carried its 21-6 advantage into the half.

After an Austin three-and-out opened the third, the Tigers picked up where they left off.

After three Marks rushes, Bonner made the play of the day.

Bonner ran a short hook pattern, which he had to dive to scoop up just above the grass. In the same motion, he lateralled the ball to Marks, who was sprinting out of the flat for the hook-and-ladder. Marks took the ball the next 39 yards for the touchdown.

Walker was ecstatic with the play after the game.

"It ended up being a heck of a play to get the pitch off," the coach said. "We knew with the look they gave us that if we could just catch the football we thought we'd be able to score on it."

DePauw closed the day's scoring when Dick found Gasbarra for a score the third time. This one was an 18-yarder that capped a four-play, 73-yard drive.

With the subs coming in for DePauw and the defense continuing to hold firm, there would be no scoring in the fourth quarter.

"All three phases were really playing well," Walker said. "We were good in special teams. The defense was facing a scheme that's hard to prepare against and you just never see. They did a good job.

"On offense we had some huge plays that really changed the field position," the coach continued. "It's one of the few games I've had my voice at the end of the day."