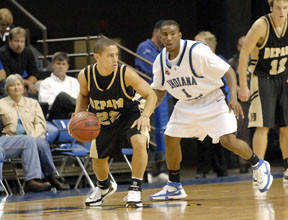 PHOTO COURTESY OF TONY HARPER DePauw junior Mike Moore scored 13 points in just 23 minutes of action in the Tigers' exhibition game against Division I opponent Indiana State. DePauw opens the season against Illinois Institute of Technology on Nov. 16 at 4 p.m.

Terre Haute, Ind. - DePauw led throughout much of its exhibition game at Indiana State, but the Division I Sycamores broke a 66-66 tie with 11 straight points in the closing minute on the way to a 77-68 victory over the Tigers.

The Tigers still led by four at 49-45 before the Sycamores scored four straight to knot the score at 49-49.

Mike Moore's three with just under three minutes left gave the Tigers a 64-63 lead, but Aaron Carter knocked down a trey with 1:47 left to put the Sycamores ahead 66-64. Steve Lemaster's two free throws with 1:32 left tied the score at 66-66, but Adam Arnold's three-point play with 1:04 left ignited an 11-0 Indiana State run.

"We did a great job tonight, early, of making adjustments and not letting the pressure get to us," DePauw head coach Bill Fenlon said.

Stephen Schott led the Tigers with 19, while Ryan Werntz added 14. Moore followed with 13, while Lemasters added 11. Brian Oilar grabbed 11 rebounds as DePauw held a 38-32 advantage on the boards.

Carter paced the Sycamores with 16 followed by Arnold with 12. Gabe Moore and Jay Tunnell each scored 10 and Arnold grabbed nine rebounds.

DePauw opens the regular season on November 16 when it takes on Illinois Institute of Technology in Manchester's Tipoff Tournament.