BAINBRIDGE -- Hav-ing escaped a strong challenge from Monrovia in last Friday's sectional championship, the road will get no easier this Friday as North Putnam faces Heritage Christian in regional action.

The Cougars (12-0) have overcome tough, familiar opponents in consecutive weeks. In the sectional semifinal, the Cougars used a surprising passing attack to defeat WCC rival Speedway 27-14 on four touchdown passes from Griffen Dahlstrom. 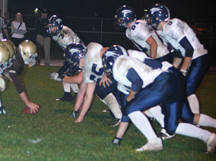 The Cougar defense will line up Friday and try to stop Heritage Christian's high-scoring offense. The regional game will kick off at 7 p.m.

Last week, the Cougars faced another WCC foe in Monrovia. The Bulldogs actually led the Cougars 7-6 at the half, and the game was in doubt until the fourth quarter. However, the Cougars found their offense late and defeated Monrovia 26-7 for the Sectional 30 title.

Now the Cougars move on to a less familiar opponent in Heritage Christian. The Eagles are 11-1 and riding a 10-game winning streak coming into Friday's contest. Their last loss came to Triton Central in week two, but the Eagles came back to avenge the loss two weeks ago in the sectional semifinal.

Most recently, they defeated Lawrenceburg 35-0 in the Sectional 29 final.

From the statistics, the matchup should be a good one on both sides of the ball. North Putnam boasts the top-rated scoring defense in Class 2A (not to mention the state), allowing just 5.25 points per game.

The Eagles, though, have the fourth-ranked scoring offense in 2A at 39 points per game.

On offense, the Cougars are ranked seventh in 2A at 35.58 points per game. The Eagles on the other hand, allow just 9.67 points per game (third in 2A).

Especially scary on the Heritage Christian defense is Tommy Eggleston, who leads the state with 11 interceptions this season.

Both teams are scoring just about 30 more points per game than they are allowing. Something has to give.

With No. 1 Jimtown losing to Fort Wayne Luers last week, the Cougars are the top-ranked Class 2A remaining team in the state. The 11th-ranked Eagles will not be intimidated, though. They have already defeated a top-10 team in Triton Central.

Although North Putnam and Heritage Christian have not previously met in football, the two squads share two common opponents this season. Each one defeated Park Tudor as well as routing Cascade.

Ultimately, the keys for North Putnam this Friday will be in their ability to play their own game. Coming out with a struggling offense as they did last week could get them in trouble against such a high-scoring offense.

Senior running backs Adam Vondersaar and Kyle Rooker and quarterback Dahlstrom will need to establish their running game early. Mix in with that the passing game Dahlstrom has been so adept at in recent weeks, and the offense should be on track.

Defensively, the Cougars need to keep doing what they do well. They stuff the run, pressure the passer and defend the pass well in the secondary. North Putnam will have to prevent a big game from quarterback Garrett Meador, who has thrown for 2,928 yards and 38 touchdowns this year. The Eagles' top receiver, Morgan Cook, will also have to be held in check.

Only two times this year have the Cougars even allowed double-figure scoring. While the Eagle offense may be able to reach this mark, there is no reason to believe the Cougar defense won't be staunch and give their own offense ample opportunities to win the game.