BAINBRIDGE -- In a game dominated by two fast, swarming defenses, a couple of breaks were going to make all the difference.

Unfortunately for the North Putnam Cougars (12-1, 6-0 WCC), those key plays went the way of their opponent Friday night. Heritage Christian (12-1) used a short field on two consecutive drives to build a 14-0 lead on the Cougars and held on for a 14-7 victory.

The first half was all about the defenses. Most of the first quarter was played in Heritage Christian territory, but the Cougars could manage nothing. 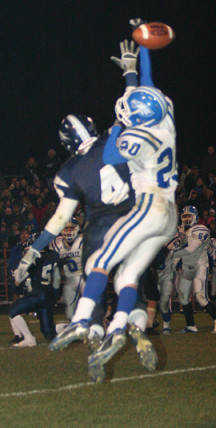 North Putnam's Jerrett Ban (4) goes up high only to have the pass broken up by the Eagles' James Houck.

As the second quarter began, the Eagles began to move the ball. The Cougars, however, made the plays they had to.

The Eagle defense also held the Cougar offense in check. The two teams combined for 10 first half punts.

One play of note in the second quarter was a Justin Ensor interception off a tip from teammate Jerrett Ban. The Cougar offense, however, could not capitalize.

At the half, two of the top defenses in Class 2A were imposing their will on two of the top offenses. The Cougars had just 52 yards of offense while the Eagles had managed just 80.

"We anticipated they were going to put a lot of pressure on our offense and try to put us into long down situations," Cougar coach Dave Pasch said. "I think that's the case that any defense wants to put an offense in those scenarios."

Whether it was run or pass, the Eagles challenged everything the Cougars wanted to do on the night.

North Putnam had the opening kickoff of the second half, but was once again stymied. A nice punt return by the Eagles' Michael Breiner set their offense up first-and-10 at the Cougar 38.

Six plays later, the Eagles' passing offense finally found what it was looking for as Garrett Meador found Morgan Cook for a six-yard touchdown. The Alex Butterworth kick made it 7-0 Heritage Christian.

Things got worse for North on the ensuing play as Ban fumbled the kickoff and the Eagles recovered.

Heritage had another short field, with just 34 yards to the end zone. This time it just took four plays before Meador scrambled four yards for the score. The kick made it 14-0.

"Big ballgames just come down to just a couple of plays," Pasch said. "They made a couple at times when they needed to be made.

"I thought that was a pretty evenly-played ballgame," he continued.

Ballgames don't come much more evenly-played. The two teams had exactly the same number of rushing yards (70), and the Eagles out-threw the Cougars by just two yards (124 and 122 yards, respectively).

Two yards did not make the difference. One short stretch of the game turned the tide.

With such a bad turn of events, many teams might have folded, but not the Cougars. As the offense continued to struggle, plagued by defensive pressure and penalties, the Cougar defense returned to form.

Although the Eagles were moving the ball, they were also coughing it up. Ensor had a one-handed interception on the Eagles' next possession. Ban followed with one of his own. 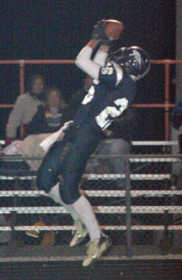 North's J.T. Francies gets full extension for a 22-yard reception.

The Eagles were doing the same, though. After each Cougar interception, the following possession ended with Heritage's Tommy Eggleston intercepting Griffen Dahlstrom.

As the fourth quarter ticked away, things began to look bleak for the Cougars. When the Eagles' Austin Olvey fumbled with 6:25 to play, though, the offense finally capitalized.

Having faced intense pressure all night, Dahlstrom got more time to pass and made the Eagle defense pay. Twice, he hit J.T. Francies for first downs before a Kyle Rooker catch set the Cougars up with first-and-goal from the one.

On his second attempt, Dahlstrom found the end zone on a sneak. With the Rob Ford point after, the Cougars cut the lead to 14-7 with 5:18 remaining.

The Eagles moved the ball, but could not close out the game on the next possession. They once again punted, putting the Cougars 79 yards from the end zone with 2:11 remaining.

The drive showed promise, with Rooker making a huge 39-yard reception to get into Eagle territory. A Francies one-handed grab two plays later gave North first-and-10 at the Eagle 23.

That was the last hurrah for the offense, though. Three incompletions and a sack later, the Eagles took over on downs with 26 seconds left.

The Eagles took a knee and claimed the regional title.

With a game that looked out of reach just over six minutes remaining, it took a lot of character from the Cougars to make it a ballgame down the stretch. Pasch gave much of the credit for the comeback to his seniors.

"These seniors, the last two years, are 25-2. The number of times we've come back from behind have been many," Pasch said. "They showed tremendous character. They're winners.

"Our seniors have provided tremendous leadership to our program, our school and our community," he continued. "They do things the right way, and they deserve the success they've had. They're going to go on to greater things." 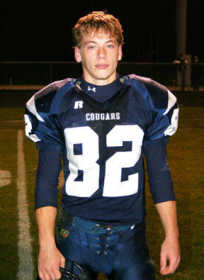 One junior who also showed tremendous character was cornerback Kyle Alcorn. The 5-foot-7-inch Alcorn lined up against the Eagles' 6-foot-4-inch Eggleston. In spite of the nine inch advantage, Eggleston made no big plays on offense all night, collecting 20 yards on 3 catches.

The Cougars conclude the season at 12-1. The Eagles advance to face Southridge in next week's semistate.

For more photos of the game, click on the following link or copy it to your browser's address box http://www.bannergraphic.com/gallery/2292/ .