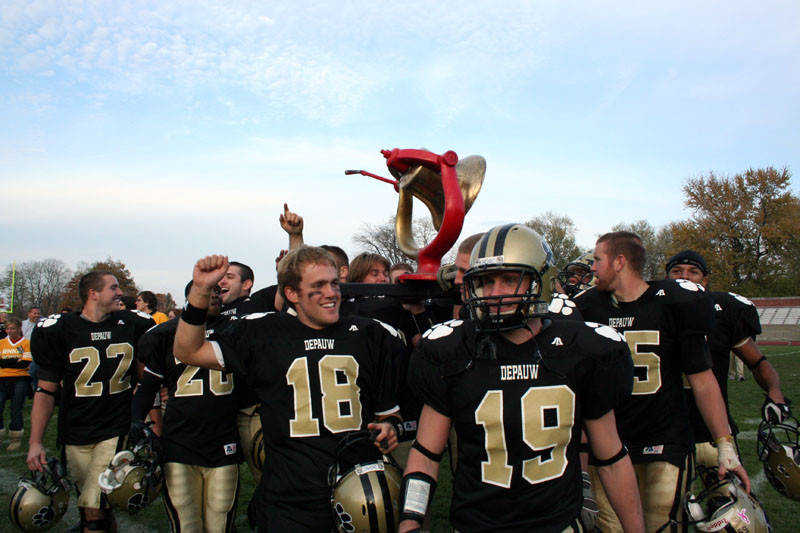 Spud Dick leads the Tigers off the field after their 24-21 win over Wabash to capture the Monon Bell.

The Tigers were 96 yards away from the end zone, and the score was tied at 21. Overtime seemed good enough -- to everyone but the Tiger offense.

With Coach Matt Walker calling relatively safe plays, the Tigers started to move the ball and, more importantly, get out of bounds. Going to senior Jeremiah Marks on six straight plays, the Tigers picked up 34 yards and still had 20 seconds remaining. 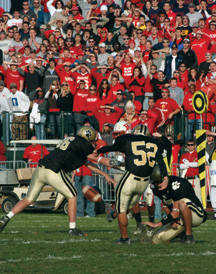 Three Spud Dick completions later (two to Bryan Mulligan and another to Marks), the Tigers found themselves at the Wabash 29-yard line with 2.4 seconds remaining.

That's when the most unlikely play of all came -- a field goal. The Tigers had missed a short field goal and an extra point earlier in the afternoon.

But on trotted sophomore Jordan Havercamp, who booted the ball through the uprights and himself into Monon Bell history.

That Havercamp was even in place to be the game's hero was remarkable. Brendan Smith started the day as the Tigers' kicker, but was pulled after missing a 25-yard field goal.

However, Havercamp had his own struggles on the afternoon, as a third-quarter extra point was off the mark.

His last-second heroics more than atoned.

Bedlam ensued as students stormed the field and the team charged across the field to reclaim the 300 lb. bell.

"I have just hugged more people that I don't know than I have ever hugged in my life," Walker said afterward.

It was the type of afternoon that comes so rarely in football, but seems to pop up every few years in this series. The two teams battled back and forth all afternoon, with Wabash taking the lead three times, only to see DePauw come back with a score of its own.

The Tigers did not lead until the final horn.

After a scoreless first quarter, Wabash drew first blood early in the second when Hudson got in on a one-yard bootleg. The Drew Oehler kick made it 7-0 with 13:25 to go.

Wabash retook the lead at the 6:29 mark when C.P. Porter ran in from two yards out.

In the second half, though, DePauw once again countered. Jeremiah Marks accounted for all but three of the 55 yards on the next drive, finishing it off with a 38-yard catch from Dick.

"We'd be stupid, and we'd look back and hate ourselves if we didn't pump it to that kid," Walker said. "We knew in his final game he was going to leave everything out there, and I can't believe how many touches we got that kid."

Instead of tying it up, though, Havercamp's kick was off the mark. DePauw still trailed 14-13.

Before quarter's end, though, Wabash answered when Hudson found Bart Banach deep down the middle of the field for a 65-yard touchdown. It was the exact same location Hudson had twice found Mike Russell in the second quarter to set up the Little Giants' first two touchdowns.

DePauw did not counter immediately, but on their second drive of the fourth, embarked on the most sustained drive by either team all afternoon.

The Tigers marched 83 yards in 15 plays, mixing the run and pass just enough to keep the Little Giants off balance.

Marks completed the drive with his second score of the afternoon, this one an eight-yard pass from Dick.

When Dick found Alex Koors for the two-point conversion, the game was once again anybody's, tied at 21.

Wabash moved the ball on its next possession, but Pruitt ultimately victimized Hudson on a fourth-and-play, setting up the game-winning drive.

While Havercamp's kick may have finished the game, the Tigers' workhorse carried the load all day. Marks rushed 45 times for 181 yards and caught seven passes for 97 yards and two scores.

It was no secret coming in the Tigers would look to Marks, but the Little Giants could not seem to stop him.

"Clearly, everybody knows he's getting the football and they know even when we drop back we're really just doing it to clear guys out and pump it to him," Walker said. "Jeremiah Marks has done so much for this program, and he's made such a huge impact on this program. What a fitting end to a career."

The DePauw win cuts Wabash's lead in the all-time series to one at 53-52-9. It also likely hurt the Little Giants' playoff seeding, as they look toward this weekend's NCAA Division III playoffs.

The Tigers finish the season 8-2.