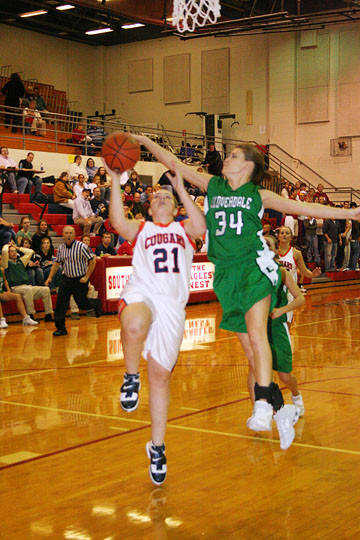 Cloverdale used size down low and a strong game from Ashley Koosman to defeat North Putnam, 77-59, to advance to the finals of the Putnam County Tournament against South Putnam.

Koosman made her presence known early, as she raced down the court and blocked the lay up attempt from North's Dakota Malayer after the Clovers failed to get the tip. On the ensuing trip down the floor, Koosman drained a three-pointer to get the Clovers rolling.

"I thought that Koosman played the best tonight than she has all year for us and really that's what we expect from her," Cloverdale head coach Bruce Cook said after the game. "We know she's capable of it. She was really relaxed tonight. We went brain-dead on the tip and she got a block and that was big for us too. She bailed us out right at the beginning.

The Clovers jumped out to a 9-point lead early and never looked back. Koosman, Kristin McCammon and Elizabeth Cheatham all scored six points in the opening quarter.

North got off to a rocky start, committing many turnovers to start the game, but head coach Kevin Smith believes youth played a factor in his team's start.

Turnovers have been a problem for the Cougars this season and Friday night was no exception, but Smith liked what he saw on the offensive end.

"I was happy with the way we handled the ball. Offensively we looked as good as we have all year tonight. When you score 60 points, you should win a ball game," he commented.

Cloverdale expanded on its lead in the second quarter by scoring 19 points with Kristen Schroer leading the way. The Clovers entered the half up 39-28.

In the second half the Cougars began to find their way but Cloverdale had amassed a lead the Cougars would never challenge.

Koosman again led the Cloverdale charge in the second half scoring 12 of her game high 19 points. Cheatham also came up big for the Clovers by throwing in nine points, most of them coming in the paint.

As the fourth quarter came to a close, Cloverdale had scored 77 points and Cook likes how his team is getting into the right frame of mind.

"I think we're getting to that point where we are starting to think basketball. You don't have to tell them what to do. They missed a few easy shots I hoped we would hit.

Kristen McCammon scored but she didn't have the game she's capable of," Cook commented.

The Clovers had a scare during the game when point guard Chelsie Haltom hit the floor hard and had to be helped to the bench. Haltom returned a short time later, showing the grit and determination she's known for. When Cook asked her about how she felt after the game, she responded -- I'm ready.

The Clovers will face tournament host South Putnam for the tournament title today starting at 6:30 p.m.

Next game -- The Clovers will face tournament host South Putnam for the tournament title today. Tournament action begins at 6:30 p.m.