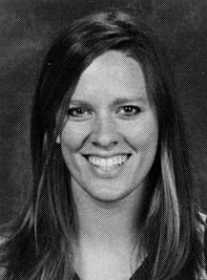 The Bears made it to the championship by defeating Emory University in four games. Washington rebounded from a loss two weeks ago to the Eagles to get the win.

In the game Spencer recorded 10 kills along with 23 digs. She also had three blocks and one ace.

In the semifinal, the Bears faced off against the No. 1 ranked Wittenberg in four games to reach the finals.

Game three looked to be all Tigers too but a Washington University rallied back to take a 20-18 lead. Wittenberg tied the game at 27-all but the Bears closed the game with kills from Spencer and teammate Alli Alberts.

The Bears dominated the fourth game, winning 30-15, setting up a showdown against in the finals. Spencer tallied 12 kills and 17 digs.

In the championship game against the University of Wisconsin Whitewater, the bears won their seesaw battled against the Warhawks in five games.

The Bears won the first and third games but a charge in the fourth game by the Warhawks send the match into its fifth game.

In the final game, the Bears came from behind to defeat the Warhawks and capture the 2007 championship.

In her final game as a bear, Spencer led all players with 19 kills and recorded a career-high 31 digs.

During her four years at Washington University, Spencer has helped her team capture one national title, two national runner-ups and one national quarterfinal championship.

Individually, Spencer has earned AVCA All-American status in 2005, was honored as MVP of the University Athletic Conference in 2006. Spencer was also voted first team All Conference and to the NCAA All-Tournament team in 2007.

She ends her career as a starter with a record of 107 wins and 8 losses.