When the Greencastle Lady Tiger Cubs found themselves trailing Tri-West by four with under two minutes to play Tuesday, they looked to be in trouble. Knowing his team did not have a lot of experience with winning, Coach Glenn Hile admitted after the game he was worried.

However, in tough situations, leaders need to step in and make big plays. Senior Grace Fisher did that by making a three with 1:53 to play, cutting Tri-West's lead to 39-38.

"Grace hit a huge shot. I called the play. We executed it and she hit it," Hile said. "When we got within one again, all of a sudden we got hope." 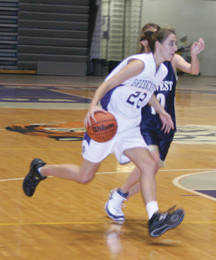 The Cubs rode that hope to a 42-41 win over the Bruins to move their record to 3-3 on the year. Down the stretch, it was another senior, Kelsey Hennette, scoring the Cubs' last four points to take the lead and seal the victory.

After his team's struggles last season, Hile was proud of how they won Tuesday's nail-biter.

"All eight of the girls that played did a great job tonight," Hile said. "This is a team that came back from a 1-20 season last year and we hadn't had very many games like this. Obviously, to win one of this nature really, really makes us step forward."

It wasn't just the scoring, though. Hile was happy with all of his players' efforts on both ends of the floor. Inside, Hennette and Olivia Miller did a nice job of limiting the Bruins' two biggest scoring threats, Sam Ricks and Jessie Jansen.

"We concentrated on making sure they didn't touch the ball, and they hardly did," Hile said. "That was the key to beating this ball club. If you let those two go off on you, you're in trouble."

While Jansen was able to get to 14 points, Ricks was limited to five on 2-9 shooting.

"We played good, hard-nosed man-to-man defense and gave all the help on them we could," Hile said.

The man-to-man was the highlight of the night for Hile.

"This was the first time in three years we've been able to play 32 minutes of man-to-man defense," the coach said. "That's a credit to these girls. We forced 17 turnovers in the first half. That's what I'm most proud of, is our ability to play man-to-man."

Off the bench, the Cubs got a boost from Chelsea Samuels and Becky Grivas, especially in the first half. Each of the two bench players gave GHS six points on the night.

"Our bench is deep. We have young ones coming in there and giving us good minutes," Hile said.

The game also gave the Tiger Cubs some vindication after a 71-30 loss to Crawfordsville last Tuesday. Hile simply wanted his team to move on, which they appear to have done.

"I gave them four days off over Thanksgiving," Hile said. "I told them, 'Go get rested. Come back with a fresh state of mind. Forget that game. Let's work real hard here and see if we can get one.'"