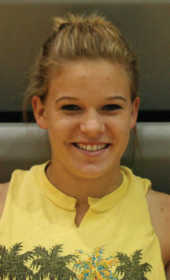 Saturday afternoon contests in Indiana high school basketball always seem to provide something unusual.  Such was the case this Saturday when the Greencastle girls dropped a non-conference tilt with Edgewood, 45-35.

In a contest where the Tiger Cubs were mired in foul trouble throughout the game's duration, the Mustangs outscored Greencastle 20-5 from the charity stripe, providing all the difference they would need.

Greencastle coach Glenn Hile agreed:  "Free throws were obviously the difference tonight. You can't help but question the disparity in some of the calls."

Disparity indeed.  The Tiger Cubs were whistled for 26 personals, while Edgewood committed but 15.  The Mustangs converted on 20 of 35 attempts at the line, while the Cubs went 5 for 11.

The first quarter ended with Edgewood on top 8-7, and the Mustangs upped the margin to five at the half, 21-16.  As the teams came out from intermission, Greencastle suffered a serious blow when Olivia Miller was DQ'd on fouls at the 5:00 mark of the third quarter, effectively limiting any inside presence for the Cubs. Greencastle was forced to live and die with their perimeter game, which wasn't particularily effective on this afternoon, while Edgewood began to pull away a bit by asserting itrself on the offensive glass, and accumulating some second-chance opportunities.

The quarter ended with the Mustangs extending their lead to eight, 33-25.

The Tiger Cubs were forced to push in the final stanza, and at times took some low percentage threes in an attempt to pull closer.

Greencastle had an opportunity to cut the lead to four points with four minutes remaning, but an ill-advised three from Mallory Miller was way off the mark, and Edgewood proceeded to draw a three-point opportunity in transition when Stephanie Beasley was fouled on a made basket and went to the line to convert. Beasley's free throw was short, but Edgewood's Brooke Schutte grabbed the offensive rebound and proceeded to connect on the put-back, extending the Mustangs lead to eleven, 42-31.

"That series of events was the defining moment in the ballgame," Hile conceded.

The remaining three minutes of the game was plagued by turnovers by both squads, with neither team able to produce much offensively, and the final margin was all but decided.

Hile was encouraged by his team's performance, despite the loss:  "I thought we played well defensively.  This (Edgewood) is a team that averages 60 points a game, and to hold them to 45 is a tribute to our kids' tenacity on the defensive end of the floor.  Unfortunately we just didn't perform well on offense.  We really don't match up well with teams that combine quickness and physicality, but this team beat (South Putnam) by 30, so overall we're pleased.  We're getting better, and will continue to do so."

The Tiger Cubs dropped the JV contest, 33-19, and were led by 7 points from Kayla Nobles.

The Lady Tiger Cubs travel to Danville Tuesday with the junior varsity game at 6 p.m. and the varsity contest slated for 7:30 p.m.