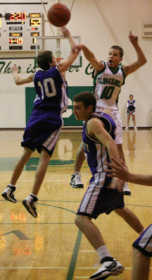 Cloverdale sophomore Brandon Moon passes inside during the Clovers match up with Clay City Tuesday. Moon lead the Clover with 21 points, going 5-10 beyond the arc.

CLOVERDALE -- When opportunity knocks, it's always better to answer.

Not answering was the issue for the Cloverdale boys' basketball team Tuesday, as they fell to Clay City 58-56 in overtime.

"I think they were able to cash in on big plays and we weren't," Clover coach Pat Rady said. "Sometimes the bear gets you and sometimes you get the bear. We didn't get the bear tonight; the bear got us."

After tying the game on a Brandon Moon three-pointer with 40 seconds to play, the Clovers (2-3, 0-1 WCC) had two chances to win the game with under 10 seconds remaining in regulation, but failed to cash in either time.

Moon was fouled on the perimeter with 6.5 seconds remaining, but missed the first half of a one-and-one.

After the Eels (4-1) grabbed the rebound, they got the ball to halfcourt and called a timeout.

Cloverdale senior Raine Young stole the ensuing inbound pass and drove to the hoop, but missed an open layup as time expired.

"You can't make excuses. They beat us. They played well and they have a nice ballclub," Rady said.

In overtime, the Clovers saw Clay City leading scorer Will Kennedy score four of the Eels' six points. Cloverdale could manage only a moon three and a Jordan Hayden free throw.

Notable in his absence late in the game was the Clovers' leading scorer Craig Blair. The senior fouled out about halfway through the fourth quarter, leaving the inexperienced Clovers even more youthful.

While the game was a loss, Rady could find a big positive in how his team competed down the stretch.

"There were times there we could have pitched in the towel, but we didn't," Rady said. "We fought back there towards the end, and I think that was a positive and we have to build on that."

Blair exited with 17 points. Moon, who was 5-for-10 on three-pointers led the Clovers with 21.

Kennedy led all scorers with 24.

In the first half, it looked like the Clovers' night. They forced 12 Eel turnovers and took a 30-26 lead into the locker room at halftime.

The Eels turned it around though, making only five turnovers the rest of the way and slowly crawling back into the game down the stretch.

"We've got a lot of things that we need to work on, and we knew that coming into this season," Rady said. "It's going to take a while to develop into the type of team that's competitive against the schools in the league that we play in.

"Hopefully these guys will keep improving and before the year's over, we are that team," he continued.

The Eels finally took their first lead of the night in the fourth quarter at 46-45. From there, it seemed to be their game to lose, especially after Blair was off the floor.

"We know we're not that team right now that can execute to perfection," Rady said. "We're making too many errors. We make too many turnovers. We still have a ways to go in our shot selection and defense. There is no phase of the game that we do not need to improve on.

"It's going to be a year that we have to keep working," he continued. "The kids have to realize that the have to come to practice with a mentality to work on things they need to make themselves better."

Rady believes the team will continue this hard work and that they will be the team he envisions by season's end.

"There's no question -- I think this team can be competitive, but it's going to take some time and it's not going to be done overnight," Rady concluded.

Cloverdale visits Monrovia at 7:30 p.m. Friday, following the varsity girls' contest between the Clovers and Bulldogs.