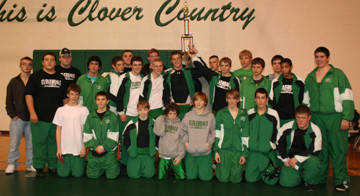 "I was really excited for every one of these guys," CHS head coach Brian Siddons said. "Going into this week, it's a team sport we knew everybody had to do their part, whether it's the junior varsity pushing the varsity or the varsity guys not giving up pins. We didn't necessarily wrestle exactly the way I'd like to but everybody wrestled hard."

Cloverdale owned the night. Along with a 3-0 record, they saw five members of their squad stand atop the podium.

Despite going 0-3 on the night, North Putnam had four champions crowed Thursday.

Tyler Ruble won at 103 and Andrew Schwarz took the 112-weight class. B.J. Brewer continued to impress by capturing the 152 for the Cougars and Alex Lance won the 171-weight division.

"The first matches we didn't (wrestler hard). We mailed it in," Cougar head coach Kenny Kerns commented. "I got them all together and told them it's either wrestler like you suppose to or let go ahead and forfeit. We wrestled a lot better against Greencastle and Cloverdale. It might have finally clicked for them.

Greencastle finished the night in second-place as a team with a 2-1 record and earned three champions in the process.

The Eagles secured third place with a 1-2 record and had two wrestlers earn top honors on the night.

At 130, Antonio Hernandez took top honors with a 3-0 record, while Chris Hurst captured the heavyweight division.

"I thought they did great. I was kind of disappointed that we didn't have more champions than that, but they wrestled hard and that's one thing I can say is that they never gave up. I'm very proud of them," said eagle head coach Todd Crosby.

The Clovers displayed a total team attitude throughout the night and rode that to victory. The Clovers' Putnam County title is the first under Siddons, who acknowledged the determination of his team after the battle.

"These guys really wanted it and it showed," Siddons commented.

Greencastle will host the Greencastle Holiday Tournament at 9 a.m. Saturday, while Cloverdale will travel to Cascade at 6 p.m. Tuesday. The Eagles will host the Eagle Super Six on Dec. 28 at 9 a.m. and North Putnam will next be in action at Rockville on Jan. 9 at 6:30 p.m.

Next meet -- Greencastle will host the Greencastle Holiday Tournament at 9 a.m. Saturday, while Cloverdale will travel to Cascade at 6 p.m. Tuesday. The Eagles will host the Eagle Super Six on Dec. 28 at 9 a.m. and North Putnam will next be in action at Rockville on Jan. 9 at 6:30 p.m.