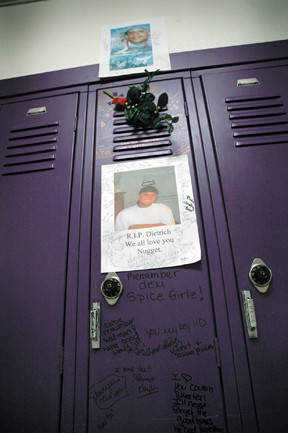 This locker at Greencastle High School has become a collection of poems and remembrances of student Dietrich Jackson, 17, who died Saturday morning.

There were dozens of notes penned on locker number 167 at Greencastle High School Monday. Messages, poems and inside jokes -- all the words of students saying goodbye to senior Dietrich Jackson, 17, who died Saturday.

The seemingly spontaneous five-foot-tall memorial, like the hand-cut purple ribbons worn by students and faculty members, has become a ritual at Greencastle High School. It is one way they have come to deal with death.

"It's human nature," said faculty member Donovan Wheeler. "You need something tangible to put your emotions into concrete form."

Unfortunately, he added, there is a precedent set for these rituals, one that developed with each tragic loss over time.

In addition to the physical signs of grief present at the high school, many students, faculty and administrators took time Monday to talk about Jackson and what they will choose to remember.

But for Church, Dietrich Jackson was different, and made a strong impression.

"This kid was so genuine, respectful and friendly," he said. "Dietrich never once passed me in the hallway without looking me in the eye and giving me a smile or a wave."

Though Jackson only began attending the school last year, after moving to Greencastle from Atlanta, he wasted no time making friends and quickly found his place in the school.

"He was a great kid, kind, and a good friend," said senior class president Tyler Wade. "You could talk to him and he would listen."

Wade recalled his friend as a gifted musician and a basketball lover, but above all, he remembers Jackson as someone who brought other people together.

"Greencastle is a very cliquish town, but Dietrich was the kind of person could reach out to everyone," Wade said. "That's what makes his loss so difficult to take. It will affect the entire senior class, student body and all of Greencastle."

Another side of Jackson:

A jovial kid with a big smile is one version of Jackson that his classmates will remember, but Donovan Wheeler, Jackson's AP English teacher recalls another side of the late teenager.

"A lot of his classmates didn't know this because he didn't convey the studious image," Wheeler said. "One thing he did have was an amazing ability to write. He had a natural ability to turn a phrase, produce a sentence, put together an argument."

Wheeler reflected on a recent conversation he had with Dietrich about how far he could go with his gift for writing.

"That's what is so hard to take," he said. "There really was some talent and ability. Had he reached maturity and kept focused, he could have done great things."

According to Wheeler, faculty has also been struggling with the loss.

"We're leaning on the kids a little bit," Wheeler said. "It's been really helpful to have them around -- just to experience it communally."

Though the school has a policy in place to assist students and faculty in the face of a tragedy like the loss of a student, Church says there is no way to really be prepared.

Guidance counselors from all over the school corporation were available to meet with students Monday, and members of the local clergy were also on hand to provide counsel. But according to Guidance Counselor Vicky Williams, it is not always the guidance of adults that helps students make sense of life and death.

"They really need each other," she said. "They need the support from each other."

According to Williams, everyone will react to loss differently, but parents should be prepared to have some tough conversations at home.

"Most of them have never really experienced loss," she said. "You just need to let them talk."

Jackson died Saturday morning at his grandmother's home after attending a party the night before. Coroner Thomas Miller said an autopsy was performed Monday morning. The cause of death has not been determined and is pending a toxicology report that is due back in 10 to 14 days.

Church says that the school is not dealing with the how's and the why's regarding Jackson's death. "These are life and death issues. You just keep all that judgment aside and deal with young people's pain," Church said.

In his early morning address to students he said just that. "It's not a time for rumors and gossip and speculation. It's a time to honor this young man."