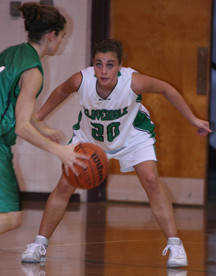 CLOVERDALE -- On Monday, the Cloverdale girls' basketball squad dismantled the visiting Vikings of West Vigo, 65-46, en route to its tenth victory of the season.

The Clovers put on a display of dominating basketball for the loyal crowd in attendance, holding the Vikings to one point for the first 14 minutes of the game.

"I thought we did some things well and we ran our offenses a little bit better tonight," Cloverdale head coach Bruce Cook commented.

Better was an understatement.

The Clovers unloaded on the Vikings from the opening tip. Kristin McCammon got things going for Cloverdale connecting on a bucket with just over a minute expired in the game and the Clovers never looked back.

Defensive pressure has been a staple for the Clovers the entire season and nothing changed Monday. Chelsie Haltom created multiple steals, her first coming at the 5:20 mark of the first quarter, as she took the steal up the court and converted the layup to put the Clovers up 10-0. In addition to wreaking havoc on defense, Haltom also tore up the West Vigo press, slashed her way through and then created opportunities for her teammates. Cook acknowledged the play of his point guard after the contest.

"She was all over the place. She broke their press for us and then had enough sense to bring it out and run the offense," Cook said. "You just can't say enough about a kid like that, who's a great kid, great in basketball and thinks the game. "You can put her on the court and she does the things you're thinking about doing. That's such a big plus for us," he added.

After putting up 20 points in the first quarter, the Clovers continued their offensive onslaught in the second quarter, recording an additional 11 to take a 31-10 lead into the half.

The Vikings didn't roll over for the Clovers and outscored Cloverdale 36-34 in the second half but the damage had been done.

Cook saw one negative that shouted from the stat book. The Clovers were only able to convert 50 percent of their foul shots, which, as the season wears on, could become a problem. The Clovers' coach acknowledged this fact and explained the course of action the team will need to take.

"I thought we did a really nice job blocking out and rebounding. On the negative side, the 9-of-21 free throws in the first half. I think that's a point we're going to have to look at and work on a little bit."

A bright spot for the Clovers has been the play of junior Kayla Shepherd. When Cloverdale lost Kristen Schroer for the season, many question marks hung over the squad. Shepherd stepped into the starting lineup and has given the Clovers another shooting threat from the outside and has transformed into a solid defensive performer.

"I thought Kayla (Shepherd) let the game come to her tonight," Cook explained. "I don't know how many fewer shots she took tonight, but they came in the flow of the offense. She hit three three-pointers but I thought that even if she missed them, they were good shots for her to take. I think that was big."

Cook also gave kudos to his team for not only being athletic but using their mental edge to break down opponents, with Haltom and Ashley Koosman being the epitome of his description.

"As a teacher, and I don't care if you're talking about Shepherd, Koosman, and Cheatham -- those girls excel in the classroom and I think there's a carry over. I like kids like that playing for us because when it comes time to do something, they are smart enough to do it," Cook concluded.