Blair and Moon each score 23 points in Clover victory

The Clovers trailed by three points entering the final quarter, 47-44 but put together an impressive fourth quarter to grab the victory. 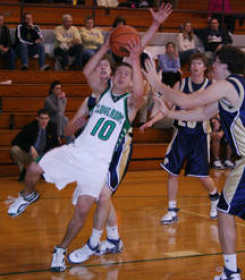 A pair of Tri-West defenders attempt to stop Clover guard Brandon Moon in the first quarter Tuesday. Moon finished the night with 23 points.

"We had good team balance," CHS head coach Pat Rady said. "I thought we played our best ball against Cascade and I thought tonight was even better. What I was really pleased with was in the closing minutes we were able to play smart basketball and we didn't turn it over.

Two free throws 13 seconds into the quarter from Blair cut the lead to one. The Bruins stayed out in front until the 6:36 mark when Jason Salter hit a bucket to tie the game at 50-all. Cloverdale took the lead for good when Blair connected on a drive.

The Clovers connected on 14-of-16 from the free throw line in the fourth to secure the win.

"I think some of the games that we've lost we lost because we missed free throws. When they give you those free ones, you need to nail them and I think tonight we hit. In the last few minutes, some guys stepped up their and that were really money players tonight," Rady commented.

Cloverdale started the game strong, taking an early lead with buckets coming from Moon, Blair, Raine Young and Kevin Dean. The Bruins mounted a small surge to cut the lead to three with under a minute to go. The Clovers led 17-12 as the quarter expired.

Leading into the half, the Bruins pressured Cloverdale into some turnovers, which they converted; outscoring the Clovers 16-15 in the quarter and cut the lead to four, 32-28 at the half.

Tri-West continued to build on the momentum it seized in the second and held the Clovers to only three field goals in the third quarter. The Bruins outpaced Cloverdale 19-12 and looked poised to steal a win on the Clover's home court.

But the Clovers had other plans.

Moon led the Clovers with 10 points in the fourth and Cloverdale doubled up the Bruins 28-14 in the final stanza to walked away with its fifth win of the season.

"We started new like we said Jan. 3 and we're 2-1 and we just want to see if we can keep building on that," Rady said.

The Clovers will travel to North Putnam at 7:30 p.m. Friday.