The South Putnam girls' basketball team has found itself in the midst of a three-game skid after dropping its contest with Tri-West 58-50 Tuesday night.

The Eagles struggled against an ever-changing Tri-West defense throughout the course of the game Tuesday. The Bruins would switch defensive sets in transition, keeping the Eagles guessing. 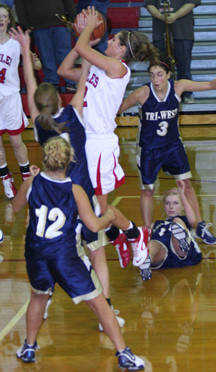 South Putnam senior Meghan Canary puts up a jumper in traffic during Tuesday's loss to Tri-West.

After a competitive first quarter, the Eagles trailed by only two at the half, 22-20, but the third quarter was what made the difference.

In the third, the Bruins opened the floodgates and outscored the Eagles 17-8 to pull ahead 39-28 after three. The Bruins' Sam Ricks score 10 points en route to her game-high 22.

Tri-West's ability to knock down their free throws made the difference in the ballgame.

In the fourth the Eagles outscored the Bruins 22-19 behind the strong performance of Leeah Butts. Butts entered the game in the fourth and proceeded to score 11 points to pace the Eagles in the quarter.

"She (Butts) came in and really gave us good minutes," steffy commented. "I didn't want to play her as long as I had to, but I didn't know what else to do. I thought she played well. I'm sure she got tired, but she played through it. She battled hard and got several offensive rebounds and put them back in.

"She just worked hard. It was a pleasant thing for us to have her back," she said.

Some of South's bench players saw significant minutes during the game, which caused slight confusion on the offensive end. Steffy commented about the need for her players to take the loss and build on it.

"We had some people playing that haven't played as many varsity minutes. Our varsity and junior varsity don't run everything the same, so there are a few set plays that I call and people are in the wrong places and not sure where they're going and that hurt us as far as the flow of it (the offense). It's one of those things we're going to have to get over," Steffy commented.

The Eagles will travel to Cloverdale at 6 p.m. Friday.

Next game -- The Eagles will travel to Cloverdale at 6 p.m. Friday.