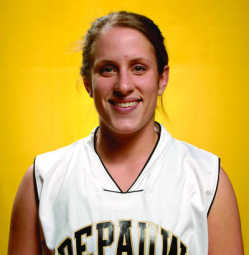 With the win, the 25-3 Tigers earned the SCAC's automatic qualification into the NCAA Division III Championship and will be making their fifth straight appearance. The tournament bracket will be released Monday morning. Oglethorpe finished the regular season at 23-5.

"I am really proud of this team," DePauw head coach Kris Huffman said.

"Going undefeated during the regular season in a tough conference and then winning the conference tournament is truly an outstanding accomplishment."

The Tigers trailed 61-60 with seven minutes left before Cassie Pruzin and Haehl hit back-to-back buckets and Emily Marshall followed with a pair of baskets to make it 68-61 with just under five minutes remaining.

Katie Kulavic started a 6-0 Oglethorpe run with a drive before Anna Findley added a layup and Kulavic made it 68-67 with a layin at the 2:45 mark.

DePauw's Kalei Lowes took a charge which resulted in Kulavic's fourth foul with 1:21 left before Haehl knocked down two free throws with 55.2 seconds remaining. Kulavic's layup with 35 seconds left made it 70-69.

With the shot clock winding down, Pruzin's layup was off the mark and Findley snagged the rebound. Before the Stormy Petrels could get a shot off, Haehl stole the ball and was immediately fouled. After Haehl knocked in both free throws, Oglethorpe got the ball into the frontcourt but their shot came after the horn sounded..

DePauw built an early seven-point lead before the Stormy Petrels closed it back to two, but Pruzin knocked down a three with six seconds left in the first half and sent the Tigers to the break with a 39-34 lead.

The Tigers' advantage never reached more than seven and Oglethorpe took its first lead of the game at 59-58 on Findley's three with 9:50 remaining. Haehl and Kulavic exchanged free throws before the Tigers took the lead for good with the 8-0 run.

Haehl led the Tigers with 17, while Marshall matched career highs with both 14 points and 12 rebounds. Pruzin added 11 points and a game-high six assists and Jenna Fernandez followed with 10 points and eight boards. Fernandez joined Haehl on the all-tournament team.

Kulavic led Oglethorpe with 22 points and Findley followed with 20, while Tina Graced scored 14 and grabbed eight rebounds. DePauw held a 39-31 edge on the boards and grabbed 20 offensive rebounds.

The victory extended DePauw's win streak to 14 and the Tigers reached the 25-win plateau for the third straight year and the fifth time in the last seven campaigns.