Officers seize $5,000 worth of drugs from Putnamville 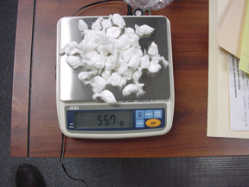 Bags of what is believed to be cocaine are weighed.

On Feb. 26, staff at the Putnamville Correctional Facility made what they are calling "a significant discovery."

While performing a routine morning inspection of an off-grounds area, more than 55 grams of cocaine, with a street value of approximately $5,000 was reportedly discovered. The drugs had been divided into small packets, most likely intending for it to be smuggled into the facility, a spokesman from the facility said.

An investigation is ongoing both internally, and in cooperation with the Indiana State Police as to who may have dropped the drugs at that location and their intended destination.

Superintendent Michael J. Osburn said he was "elated that staff was very diligent in their duties and that a large amount of illegal drugs was intercepted before it reached its destination."

Meanwhile, a correctional facility officer was arrested on suspicion of theft.

Rollie E. Allen, 33, from Owen County was arrested at the Putnamville Correctional Facility on Wednesday.

The arrest was the result of a three-month investigation conducted by the facility's Internal Affairs staff, with the assistance of the U. S. Postal Inspector.

They believe Allen exercised the unauthorized removal of a blank postal money order from the facility.

Allen has been employed with the Putnamville Correctional Facility as a Correctional Officer since March 21, 2005.

His employment has been suspended pending the outcome of an investigation by Indiana State Police.

"We hold our staff to high professional standards and will not tolerate criminal behavior at the workplace," stated Supt. Michael J. Osburn.