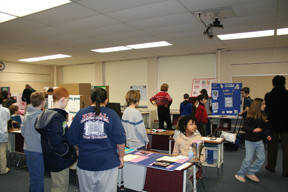 Students and teachers browse the room during this year's Invention Convention at Tzouanakis Intermediate School on Friday.

Children are being taught to think like and be inventors during this year's Invention Convention at Tzouanakis Intermediate.

Eve Stark's combined fourth and fifth grade class spent most of this nine-week's science curriculum learning about the importance of creativity. The students began by working on a book report of famous inventors. The idea of the book report was to figure out what made inventors special.

Following the book reports on inventors, Stark asked her students what it was in their life that bothered them and what could they do to make their lives easier.

"The students all began with an idea they presented in front of the class," Stark said. "Then they would brainstorm as a class to give the individual inventors ideas on how to improve."

Once the students had their idea, the next step was to make a mock-up of their invention. The purpose was to work out the kinks before a great deal of money of was spent on the actual invention.

Students from around the school were ushered into the pod-A classroom where Stark's students had their inventions set up. They spent an hour and a half Friday morning explaining their inventions to everyone who came up to them.

Among the inventions were a sure-wash caddy, ensuring that people get the proper amount of shampoo and conditioner, a slipper that vibrates to help soothe the wearers foot after a long day at work, a new way to cook three hotdogs at a time during campfire without worry of being singed and many other helpful and clever ideas.