New covered bridge being built like the old ones 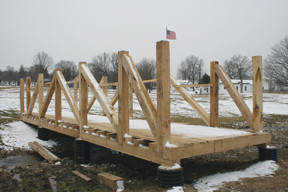 Wooden beams of yellow poplar are in place across a small creek running next to Forest Hill Cemetery in Greencastle and will serve as the frame for a covered bridge being installed as a group project.

A skeleton can be seen at the Forest Hill Cemetery.

Just south of Veteran's Memorial Highway, there stands a wooden skeleton of what is to become a new covered bridge in Putnam County. This joint effort is between the Putnam County Jail and the Forest Hill Cemetery.

"We want to enhance the beautification of the cemetery and to promote covered bridges in Putnam County," Ernie Phillips, Forest Hill Cemetery supervisor, said.

Tom Gilson, alongside Tommy Daniels, designed the bridge to be fully functional.

"The idea was to help get the mowers off of Cemetery Road and to promote the beautification of the cemetery," he said.

The new bridge is to be a companion to the already standing covered bridge and swinging bridges that span the creek behind the jail. Currently no name ideas are in place for the bridge, however Phillips believes a name will follow the completion.

Many contributors are involved in the materials for the bridge. Duke Energy bored the concrete footers while Cash Concrete donated the concrete. Both Pingleton Sawmill and Cook & Son Lumber donated the lumber for the project.

Finally, Loren Caldwell of F.B.I. Buildings donated the metal for the roof and Porter Paints donated all the paint.

"[The bridge project] was as close as we can get to being free," Phillips said. "I don't know what it would cost if we didn't have all the company donations," he added.

Using Yellow Poplar and a similar design to local covered bridges, Phillips believes with upkeep by the cemetery this bridge should last just as long as other larger scale bridges in the county.

Around the holidays, Phillips said he believes the 48-foot bridge will be lit up at night similar to the one behind the jail.

The theme at Forest Hill for the next five years is cemetery beautification. Phillips mentioned he would like for this bridge to carry cars one day, but currently it will be used primarily for the mowers to cross the creek while also offering shelter from the rain.