DePauw women's basketball coach Kris Huffman is always one to emphasize defense and rebounding to her team more than offense. This weekend, that proved to be a solid approach. 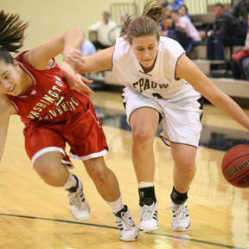 Despite shooting under 40 percent for the weekend and suffering through some tough shooting stretches, DePauw made it through its games with Denison and Washington, defeating the latter 73-66 Saturday at Neal Fieldhouse, to advance to the Division III women's basketball Sweet 16.

It is DePauw's third straight appearance in the round of 16.

"Something that we've learned throughout the year is that the game is 40 minutes long and sometimes our shots won't fall," senior guard Gretchen Haehl said afterward. "We just have to be confident and stick to it and really buckle down and play strong defense and own the boards. I think that's what really gets us moving."

The Tigers (27-3) weren't exactly moving at halftime, though. Not only did they trail Washington 33-32 on the scoreboard, they were also down seven in the rebounding department.

"We really talk about defense and rebounding for those days the ball doesn't want to fall in the cylinder for you. We were down seven rebounds at halftime and we were plus two at the end of the game. So I think that was crucial, especially down the stretch," Huffman said. "I'm picturing Emily Marshall grabbing some key rebounds late in that half."

Marshall's absence was part of the problem in the first half. Although the Tigers grabbed the early lead, Marshall also picked up two fouls in the first two minutes. She did not return until after the breaks.

"When I got those two early fouls I was really mad, but Coach told me to keep my head in it," Marshall said. "On the bench I kept cheering. I knew I had to keep focused because they were going to need me."

With DePauw's shots not falling, Washington began to make theirs, closing the half on a 18-8 run to take a one-point lead into the half.

While the Tigers' offense may have been of concern, Huffman focused elsewhere at the half.

"Coach said during halftime that we pride ourselves in defense and rebounding, so if we can win that, our offense will come," Marshall said.

Huffman also talked about some intangibles.

The two teams traded the lead a number of times, but the Bears clearly did not have the momentum they carried into the half.

One key offensively was the emergence of Jenna Fernandez. The team's leading scorer on the year, the sophomore had just five points at the break. She came back with 12 in the second half.

"I always try to think positive. I know when things aren't going right that you can't get down on yourself and you always have to think of the next play. I had to believe in myself and believe that my shot would fall eventually," Fernandez said.

A Fernandez bucket at the 13-minute mark put the Tigers up 45-44, a lead they would not relinquish.

The remainder of the game would not be a cakewalk, though. The Bears continued to fight and the Tigers missed some shots. However, they also got the offensive rebounds they really needed.

"Emily had a few (offensive rebounds). Adedrea (Chaney) had a put-back that really helped us. It can take a little wind out of the sails for a team defensively if you get a rebound, kick it back out and start swinging the ball again," Huffman said.

The Tigers stretched the lead to 57-50 only to see the Bears twice cut it to one point. Eventually, though, DePauw's rebounding made the difference, as Washington coach Nancy Fahey acknowledged.

"Rebounding was difference in the game. They were really aggressive on the offensive boards. When the shots go up, they have a sense of when to hit the boards hard," Fahey said.

With Washington within three points with 2:04 remaining, DePauw finished the game making eight straight free throws to close out the Bears 73-66.

Fernandez and Haehl led the Tigers with 17 points each. Cassie Pruzin was just behind with 15. Marshall and Andrea Travelstead each had seven boards. Three different Tigers had two assists.

Haehl has saved some of her best basketball for the twilight of her senior year.

"I think being a senior and knowing that it is the end, just leaving it all on the floor and playing your best is what every senior strives for," Haehl said. "I think that's really where I am right now and just a little more confident than throughout the year."

DePauw will face Amherst Friday at Wisconsin-Whitewater. The game time will be announced Monday.

"We'll need these players to get some rest, catch up on their studies, eat right and get healthy and the coaches will try to figure out how to win the next game," Huffman concluded.