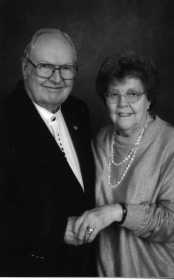 The couple moved to Greencastle in 1994 from their farm east of Brick Chapel.

Both are graduates of Bainbridge High School. Willard served in the Coast Guard during World War II. Jean was associated with Hopkins-Walton Funeral Home then later with Milton Berry Insurance.

Willard retired from IBM in 1985 after 29-and-half years.