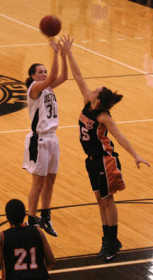 DPU will have little time to celebrate their win as they will face a tough University of Wisconsin at Whitewater squad. Adding to the Tigers difficulties is the fact that the game will take place on the Warhawks' home hardwood.

The Tigers have been able to go deep into their bench all season with great effectiveness and will hope the trend continues today. DePauw used 10 players in the Amherst contest with nine of those putting points on the board.

DPU struggled from the floor, shooting an uncharacteristic 33 percent. The Tigers shot a dismal 28 percent in the second half but were able to make them when they counted to pull out the win.

The Tigers continued to display their impressive defensive play, holding Amherst to less than 40 percent from the field and nine rebounds under their season average. DePauw hauled in 40 rebounds with Emily Marshall grabbing nine, including six offensive boards.

In their contest, the Warhawks poured 96 points on Simpson, with six players scoring in double figures. UW-Whitewater shot a staggering 55 percent from the field, including 48 percent from behind the arc.

After averaging four points a game for the season, Trisha Thill led the Warhawks with 18 points, knocking down 4-of-5 from three-point territory. Kelsey Hendrickson, Tiffany Morton, Dana Thompson and Heidi Sonntag scored 11 each while Lindsey Buechner added 10.

The Tigers continue their quest for a second straight NCAA championship as they face UW-Whitewater's at 8 p.m. today. The game will be carried live on 91.5 WGRE.