Xplosion Fastpitch off to impressive start 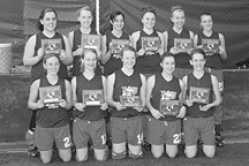 The Xplosion Fastpitch 14U softball team continued its 2008 season by taking first place in the NSA World Series Qualifier in Fort Wayne Jan. 18-20.

The team took second place in the ASA A Northern National Qualifier Feb. 8-10 at the Sportszone in Indianapolis, and another first place victory at the NSA World Series Qualifier in Pekin, Ill. Feb. 29-March 2.

Xplosion boasts a 34-8 record to date. Xplosion is ranked No. 2 in the NSA North/Central Zone which includes Indiana, Illinois, Ohio, Michigan and Missouri.

The Xplosion is comprised of athletes from multiple school throughout Indiana.