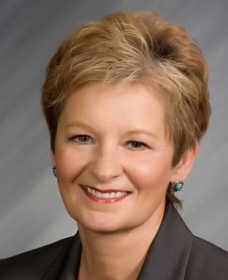 From the courthouse in Hendricks County to the Statehouse in Indianapolis, Connie Lawson calls herself "a proven leader for Hoosiers."

Now in her 12th year as a member of the Indiana Senate, Lawson believes she has made an indelible mark, both in terms of legislation authored and roles fulfilled.

In 2006, she was selected by President Pro-Tem David Long to serve as Senate Majority Floor Leader -- the first time ever a woman has served in that position.

She currently chairs the Senate's Local Government and Elections Committee, a key group during this time of property tax reform.

Lawson also chairs the Elections and Redistricting Subcommittee and has chaired the Commission on Mental Health since 2002, carrying numerous pieces of legislation on mental health issues.

She has received numerous awards from the mental health community for her efforts.

Lawson is the past national chairwoman of Women in Government. Women in Government is a bi-partisan organization established for the education of women state legislators. Lawson says she brings a wealth of local government experience to all of these roles.

Before joining the Indiana Senate in 1996, she was Hendricks County Clerk for eight years. During her tenure there, she was honored as Indiana State Election Board's "outstanding administrator" and received the "Circuit Court Clerk of the Year" award in 1993.

One of the key pieces of property tax legislation -- reforming the assessment system -- is authored by Lawson. Senate Bill 16 would create one highly qualified assessor per county and require certification for all assessors and office employees.

She is also a co-author of legislation that would repeal the small amount of property taxes now used by the state, a move that would mean 100 percent of all property tax revenue would go to fund local government.

Lawson has also been a player on many other issues. Her other recent legislative efforts have included:

* a bill to improve severe weather warning coverage in Indiana;

* a bill to crack down on predatory lending practices and reduce mortgage foreclosures;

* a law that educates young women about the risks of cervical cancer and a vaccine that prevents it.

On the education front, Lawson helped secure funding that is making a brand new Ivy Tech campus in Greencastle a reality.

In regards to transportation, Lawson's efforts were said to be key to obtaining funding for the Interstate 74 and Ronald Reagan Parkway Interchange in Hendricks County.

She is married to Jack, with whom she co-owns Lawson & Co. auctioneers. She has two children and seven grandchildren.