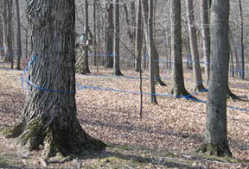 Gone are the days of hanging buckets on the sides of trees. A well-planned system of tubing carries sap from the tree to where it is processed into syrup. The final step requires exact precision, as the sap must reach a temperature of 221 degrees. To heat the sap, a furnace is run at 2,100 degrees. When the sap is finished heating, the final product is syrup.

In 1916, Indiana was the leading maple syrup-producing state in the country. The landscape we see today of well-cultivated fields once were acres filled with virgin beech and maple trees.

As timber gave way to farm fields, production of maple syrup began to vanish with the trees. But not all the woodlands are gone, at least not in Putnam County, and maple syrup production flows on at Harris Sugar Bush Camp.

Located just two-and-a-half miles off U.S. 231 on Brick Chapel Road, the camp is one of the largest producers of maple syrup in Indiana. 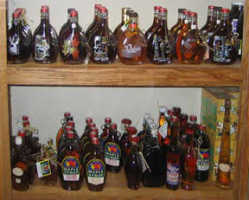 Harris Sugar Bush offers many maple sugar products at their store located at the camp on Beck Chapel Road.

According to owner Art Harris, the camp will have 3,400 taps this year and will do another 1,000 taps for another local Putnam County camp that burned last year.

And, since trees are not tapped until they have a diameter of 25 centimeters (10 inches) at chest-height and are at least 40 years old, there is good evidence that some virgin timber remains in Putnam County.

Maple trees grow in the Northern Hemisphere in Asia, Europe, North America and northern Africa, but maple syrup is purely a North American phenomenon. This is because the sugar maple, from which most syrup comes, only grows in North America.

According to Harris it takes about 45 gallons of raw sap to make one gallon of maple syrup. And, while many Hoosier syrup makers use buckets, Harris has more than 15 miles of plastic tubing and vacuum lines for collection.

"The actual process of collecting the sap and turning it into maple syrup is more complicated than it looks," said Harris.

Sap flow is totally weather dependent, and syrup makers tap their trees when daytime temperatures accompanied by bright sunshine reach 40 degrees Fahrenheit during the day and drop well below freezing at night.

Generally, this means harvest time runs between February, March and early April. The season will end when nighttime temperatures no longer reach the freezing mark with any regularity.

Harris uses vacuum lines and plastic tubing which run from the trees to the collection site.

During the actual process of creating syrup, the sap first undergoes the process of reverse osmosis, where excess water is removed. The sap then enters an evaporator. As the sap flows from one evaporating bin to another, the remaining excess water is boiled away. The evaporator used by Harris can convert 2000 gallons of sap into syrup per day.

The final step requires exact precision, as the sap must reach a temperature of 221 degrees. To heat the sap, a furnace is run at 2100 degrees. When the sap is finished heating, the final product is syrup.

Intermediate levels of boiling can also be used to create various intermediate products, including maple cream that is less hard and granular than maple sugar and maple butter, creamy, with a consistency slightly less thick than peanut butter.

Harris exports his maple syrup products to Europe and Japan as well as all over the United States.

Harris also sells the vacuum systems he uses for his own maple sugar harvest.

The Indiana Maple Syrup Association reports that about 5,000 gallons of maple syrup were produced Indiana in 2007. This includes 31 counties in the state that have a least one active maple syrup producer.