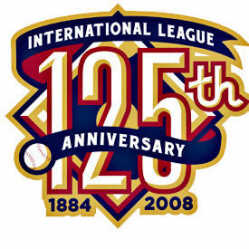 INDIANAPOLIS -- The International League turns 125 this season, and, in many ways, it's never looked better. OK, the greatest player of all-time isn't in the IL this year (as Babe Ruth was in 1914 when he played for the Providence Grays and Baltimore Orioles), and the color barrier won't be broken (which Jackie Robinson did in 1946 when he played for Montreal Royals).?But as International League President Randy Mobley points out, the league, which drew over 6.7 million fans in 2007, expects to set attendance records during the next three years.

This season, Ottawa relocates to Allentown, where the franchise will be called the Lehigh Valley IronPigs. Next year, a new ballpark is scheduled to open in Columbus (Ohio) and Richmond will move to Gwinnett County (Ga.). Then, Charlotte will get a new park in 2010.

"We have been looking forward to the 2008 season for a few years now," Mobley says. "In each of our ballparks we will be revisiting special moments in the league's history and in many cases hosting individuals who are part of that history. There's a common thread that we hope to make apparent between everyone who has ever attended, played in or worked at an IL game. It is going to be a season-long celebration."?To celebrate, the league will:

-- Revive its Hall of Fame and induct 27 new members, including Don Buford, a catalyst for the Indianapolis Indians' 1963 championship team.

-- Hold a game in Cooperstown on May 18 between Syracuse and Rochester. Rochester has been in the league for 121 years, and Syracuse for 94.

-- Put the anniversary logo on bases and balls.

-- Hold an on-line photography contest for fans to show their shots from the ballpark.

"Individual clubs will be doing things to emphasize their history and affiliations," says Mobley, the league president since 1990. "We want to make this a historic season in many ways."?In honor of this milestone season, we take a look at the IL's history, highlights, some of the oddities and, of course, the Indianapolis Indians' history in the league.

The International League hosted the longest game in professional baseball history, a 33-inning contest between Rochester and Pawtucket, which began on April 18, 1981. The game was suspended after 32 innings and finished June 23. Total playing time: eight hours and 25 minutes.?"They tell the story," Mobley says, "about how at 3 a.m. they were fixing scrambled eggs in the concession stands for approximately 35 people who stayed. There are stories about the home plate umpire who took his nephew to the game and the boy's mom calls around frantically to find out where her son is. After several calls, she finds he's still at the ballpark. Somebody else tells the story about going home and informing his wife he'd been at the ballpark till 4 a.m. He got the 'I bet you were' response."?Some of the players that day included Cal Ripken Jr., Wade Boggs, Bruce Hurst and Bobby Ojeda, who was the winning pitcher. Dallas Williams, who went on to have great years with the Indianapolis Indians, went 0-for-13 in that game as a member of Rochester.

The International League Baseball Writers Association created the IL Hall of Fame in 1947 and continued to induct players through 1963. In all, 51 players were honored.

"Then, for some reason," Mobley says, "it just drops off the face of the earth after '63." Mobley guesses the writers association disbanded, "but we have no indication why it happened."

"One of my biggest fears was we would start it up again, induct someone and then have some long lost relative come out of the woodwork and say, 'that's nice, but he was originally inducted back in '52."

Now, after much research, the league felt comfortable enough to choose 27 new members -- some who you may recognize (Don Buford, Lefty Grove, Tommy Lasorda, Joe Morgan and Jim Rice), and some who you've probably never heard of.

Induction ceremonies will be held in each of the 14 IL ballparks, including June 20 at Victory Field.

From 1887 to 1962, the Indianapolis Indians were in other leagues. But following the 1962 season, the American Association suspended play after 60 years, leaving the Tribe without a league.

The International League team owners had reservations -- mostly about the cost of travel -- but they let Indianapolis and Arkansas into the league in 1963 after the Major Leagues agreed to pay a $94,000 travel subsidy to the other IL teams.

The Indians went on to win the pennant over Syracuse in five games. Then, on Sept. 13, Indianapolis took the Governors' Cup, beating Atlanta four games to one.

The Indians moved to the Pacific Coast League the next year. They rejoined the IL in 1998.

The IL put together a day-by-day calendar of its greatest moments. The Indians are listed eight times:

-- April 7, 2005: Boston Red Sox ace Curt Schilling opens the season on rehab with Pawtucket. Schilling's first game is at Victory Field, where he is tagged for seven earned runs on 11 hits.

-- July 11, 2001: Victory Field plays host to the 2001 Triple-A All-Star Game before a sellout crowd of 15,868 and a national television audience on ESPN2. Louisville outfielder Adam Dunn crushes a pair of homers, including one that lands on West Street. Indians first baseman Mike Coolbaugh also hits a two-run blast.

?The International League boasts that Jackie Robinson spent 1946 playing for the IL's Montreal Royals before breaking the color barrier in the Major Leagues the next year. It wasn't an easy transition for Robinson.

Writer Roger Kahn reported this story in a 1946 exhibition game between Montreal and Indianapolis in Deland, Fla. In the first inning, right after Robinson slid across home plate, a local police officer ran onto the field. The cop yelled at Robinson: "Get off the field. I'm putting you in jail."?Kahn wrote: Robinson claims his first reaction was to laugh because the situation seemed so ludicrous. But he did not laugh. Robinson had attracted a huge crowd, which was common in the south. And the crowd rose to its feet. The Indianapolis players stood stark still, watching. Then Jackie turned and walked toward the dugout. And Clay Hopper (the Royals' manager) emerged from it.?"What's wrong?" Hopper asked. "Ask the cop." The policeman: "We ain't having Negras and white boys mix in this town. You can't change our way of livin'! Negras and whites, they can't sit together. They can't play together. And you know damn well, they can't get married together!"?On April 18, 1946, Robinson debuted with four hits, including a three-run homer, stole two bases and scored four runs.

He went on to lead the IL in hitting (.349) and runs scored (113) as Montreal won the Governors' Cup championship. In 124 games that season, he collected three home runs, 66 RBI, 40 stolen bases, 155 hits, 25 doubles and eight triples.?"That's a historic season for the league," Mobley says, "and one the league takes great pride in."

Babe Ruth's 1914 stats with Baltimore and Providence in the International League: