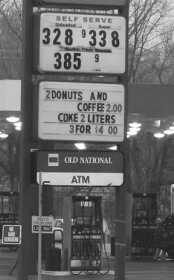 Gas prices continue to be high with news of more troubles in the Middle East on Thursday.

Customers in Putnam County have to bite their tongues when they approach the local gas pump.

Gas prices in Greencastle were as much as 15 cents a gallon more than surrounding counties Thursday afternoon.

Crawfordsville, a town only slightly bigger than Greencastle generally has much cheaper gas.

Having the third lowest price in the state, Country Market Express in Crawfordsville is around 10 cents lower than the national average. However, another station in Crawfordsville has the highest regular gas price of $3.49. Why is there so much difference from one station to the next and one town to the next?

Supply and demand and the particular company's pricing policies are the most commonly believed reasons for this discrepancy.

Greg Seiter of AAA travel club in Indianapolis told the BannerGraphic, "There is no real clear cut reason for the difference in prices. Really the only people who know for sure are those in the inner-workings of the oil companies."

Gas customers in Greencastle are rather torn on this issue. Some expressed they have changed their driving habits, while others are complacent and say there is nothing that can be done.

Debbie Davis, Morton, said, "I don't run to Greencastle all the time to get something now. I wait until I have multiple errands before making the trip."

However, Rita Reitzel, Stilesville, explained that she hasn't really changed her driving habits, but does notice the difference in prices between Plainfield and Greencastle.

As of Wednesday evening, the regular unleaded gas price in Greencastle was four-cents above the state average, two above national average.

The small margin of difference between the average and the price may not be enough to constitute price gouging though.

"Price gouging is really defined by the individual," Seiter said. "If a customer feels they are being cheated at the pump, they should report it."

Although the national average is at an all time high, Indiana still has not topped its average high set last year.