Nearly six years after plans for the construction of a new Emergency Operations Center (EOC) and 911 facility were formulated, the project is nearing completion. 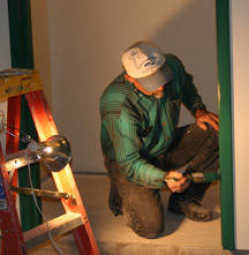 John Sadler was busy this week painting doorframes and railings in Putnam County's new Emergency Operation Center. The facility should be move-in ready by June.

Putnam County 911 Director Dave Costin told the BannerGraphic that he expects the building to be ready to move in after April 30.

"We'll do a final check and come up with a punch list on April 30," stated Costin. "Our cut over date is August 5 so we'll spend June moving and July training," he added.

The project, which will cost approximately $2.6 million to construct and fill with equipment, includes dispatch, training, radio and equipment rooms. It also has offices for the E911 director and logistics office, conference room along with break rooms and a high-tech training room.

Designed for multiple uses, the training room will have five 74-inch flat screen televisions mounted on one wall, a smart board with touchpad, projection capabilities, 13 computer ports and three dedicated computers. The center screen will have sound wired to it.

"During training sessions or in an actual emergency we can project live calls," said Costin. "Emergency channels, weather information, whatever we need to show can be projected on different screens at the same time."

Off-site surveillance is also available through Virtual Private Network (VPN), which is a communications network tunneled through another network and specifically dedicated. VPN can rapidly link enterprise offices, as well as small-and-home-office and mobile workers.

Security is tight at the facility, which will have only one entry area with camera surveillance at all times. There are other exit-only doors at the back of the building that are security proofed.

The front of the building is also protected against terrorist attacks with vehicle barriers. Front windows are made of a polycarbonate material that can withstand a F5 tornado and are bulletproof.

The equipment room is about to have a drop floor and drop ceiling put in, is well grounded in case of lightening strikes. The room will contain room for four dispatchers and their equipment. A small lounge area adjacent will have a three-fourth wall so communication can take place if necessary without dispatchers leaving their desks. 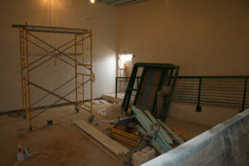 Putnam County's new Emergency Operation Center will feature a state-of-the art training room. Work continues on the facility which will be fully functional in early August.

This room is designed to meet the FCC's radio requirement for the next 15 years. It will have all the latest upgrades in radio communications including an 800-megahertz system, which allows all police, fire and medical agencies to communicate on the same frequency.

The tower, located just outside the building is built to withstand an F3 tornado with 140 mile per hour winds.

According to Costin it is twice the strength of the old tower. The bottom half of the tower can withstand an F4 tornado.

"The top of the tower is made to just bend over leaving the bottom half intact in case of storm damage," reported Costin.

The conference room would be the headquarters in a disaster and can accommodate 8-10 people. It will have a 47-inch flat screen television so commissioners and others in charge during a disaster have access to emergency information.

A room has been designated as a Sensitive Compartmented Information Facility (SCIF) This room provides formal access controls (approved by the Director of Central Intelligence) and requires sound isolation as well as RF shielding throughout the room to prevent unauthorized information flow.

This special room is sound proof and has electric fencing built into the walls. Making the room a SCIF cost an additional $2,500 but it makes the facility eligible for government grants.

"The SCIF will pay for itself eventually as we can apply for government grants that we wouldn't be eligible for without it," commented Costin.

The room, which will be used for some storage at first, is located on the mezzanine level above the training room.

County Commissioner Gene Beck is excited about the completion of the facility. He and Costin agree that the new emergency center should suit the needs of Putnam County for the next 50 years.

"We're anxious to get it finished," stated Beck.

"It's been a long time coming," he concluded.