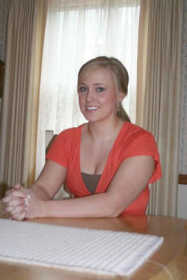 Savahannah Lien is no stranger to the community. She is a 2004 graduate of Greencastle High School, an Emergency Medical Technician (EMT) for Operation Life and a former Miss Indiana contestant.

She was chosen from a group of 300 girls to be one of 33 princesses for the Indianapolis 500 Festival. This festival begins May 1 and goes through the whole month.

"Mostly we do community service in our own communities and around Indianapolis," Lien said.

"When we aren't doing our own community outreach program, we are either helping the other princesses with theirs, or doing activities like passing out towels at Pacers' games or water during the upcoming Mini-marathon in Indianapolis."

Of the 33 princesses (33 princesses to represent the 33 drivers in the 500) one will be crowned queen on May 17. Until that time, they must participate in one more interview on April 19 and give a speech at the princess luncheon on April 27.

She explained that being a 500 Princess is allowing her to be a great deal more involved in the Indianapolis 500. This competition wasn't a pageant.

"I'm not really a pageant person, this was based more on community service which made me happy," said the former Miss Indiana competitor.

When she is not attending IUPUI she works for Putnam County Operation Life as well as spending time with her fiancé.