The baseball season is off to an abbreviated start for South Putnam and Cloverdale as their opening day showdown was cut short by Mother Nature. 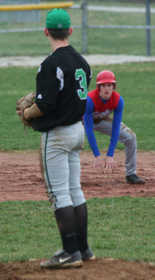 South Putnam coach Harold Campbell and Cloverdale coach Tim Savini acknowledged after the game the importance of starting the season against a conference and county opponent. Both also voiced concern about the weather but hope they'll be able to get the games in.

The Eagles held a 3-1 advantage over Cloverdale when the rain in at the top of the fifth inning. The teams will resume action today at 4:30 p.m. at South Putnam.

Both squads showed the rust from the off-season but it was South who got on the board first.

In the bottom of the first, Brice Steinbaker hit a routine fly ball to center that should have ended the inning. The Cloverdale fielder misplayed the ball and let it hit the turf leading to Cameron Chestnut and Derek Dean rounding the bases. With the runs, the Eagles went up 2-0.

Cloverdale got on the board in the third when starting pitcher Josh Flory connected on a shot that found its way over the right field fence, pulling the Clovers within one run.

South Putnam answered back in the bottom of the third when Dean scored for a second time, bringing the score to its current 3-1 state.

The Eagles and Clovers will finish up Monday's matchup Tuesday at 4:30 p.m. Tuesday's game will directly followed the game weather and field condition permitting.